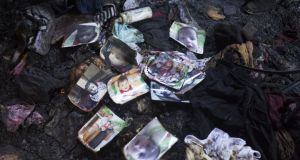 The July 31st firebombing of his family’s home in Duma, a West Bank hamlet, killed Saad Dawabsheh’s son, Ali, and also badly burned his wife, Riham (27) and their other son, Ahmad, both of whom remained hospitalized Saturday with life-threatening injuries. Photograph: Oren Ziv/Getty Images

A Palestinian man who was severely burned in an arson attack last week that killed his 18-month-old son Ali Dawabsheh died of his wounds early Saturday, according to a hospital spokeswoman.

Saad Dawabsheh (32) was to be buried Saturday. The July 31st firebombing of his family’s home in Duma, a West Bank hamlet, killed Dawabsheh’s son, Ali, and also badly burned his wife, Riham (27) and their other son, Ahmad, both of whom remained hospitalized Saturday with life-threatening injuries.

Jewish extremists were suspected in the firebombing, which was branded a terrorist attack by Israeli and Palestinian politicians.

According to the Israeli news website Ynet, Dawabsheh’s condition worsened Friday, and members of the family gathered at the Soroka Medical Center in Beersheba. Inbar Gutter, a hospital spokeswoman, later confirmed that Dawabsheh had died.

A neighbour of the family, Mohammad Dawabsheh - many residents of Duma share the same last name - said the men of the village had gathered in a mourning tent erected at the local school and were waiting for the body to be returned. “Sadness has settled on the village,” he said by telephone.

Nasser Dawabsheh, Saad Dawabsheh’s brother, told Ynet he had been informed that his brother had died at 4:30am.

“Israel must arrest the settlers who perpetrated this murder and bring them to justice,” he said, according to Ynet.

Witnesses and officials attributed the firebombing to Jewish extremists because of Hebrew graffiti sprayed nearby. “Revenge!” was written on a wall, next to a Star of David.