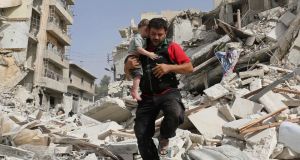 A Syrian man carries a baby after removing him from the rubble of a destroyed building following a reported air strike in the Qatarji neighbourhood of Aleppo on Wednesday. Photograph: Ameer Alhalbi/AFP/Getty Images

Warplanes mounted the heaviest air strikes in months against rebel-held districts of the city of Aleppo overnight, as Russia and the Syrian government spurned a US plea to halt flights, burying any hope for the revival of a doomed ceasefire.

Rebel officials and rescue workers said incendiary bombs were among the weapons that rained from the sky on the city. Hamza al-Khatib, the director of a hospital in the rebel-held east, told Reuters the death toll was 45.

“It’s as if the planes are trying to compensate for all the days they didn’t drop bombs” during the ceasefire, Ammar al-Selmo, the head of the civil defence rescue service in opposition-held eastern Aleppo said.

“It was like there was co-ordination between the planes and the artillery shelling, because the shells were hitting the same locations that the planes hit,” he said.

The assault, by aircraft from the Syrian government, its Russian allies or both, made clear that Moscow and Damascus had rejected a plea by US secretary of state John Kerry to halt flights so that aid could be delivered and a ceasefire salvaged.

In a tense televised exchange with Russian foreign minister Sergei Lavrov at the United Nations on Wednesday, Mr Kerry said stopping the bombardment was the last chance to find a way “out of the carnage”.

Moscow and Washington announced the ceasefire two weeks ago with great fanfare. But the agreement, probably the final bid for a breakthrough on Syria before President Barack Obama leaves office next year, appears to have suffered the same fate as all other doomed peace efforts in a war that has killed hundreds of thousands of Syrians and made half the nation homeless.

There was no immediate comment from the Syrian military or mention on state media of Thursday’s bombardment of Aleppo.

“It was the heaviest air strikes for months inside Aleppo city,” said Rami Abdulrahman, director of the Syrian Observatory for Human Rights, which monitors the conflict from Britain.

A senior official in the Levant Front, an Aleppo-based rebel group, said: “The Russians only want surrender. They have no other solution.”

In another sign of the Syrian government’s determination to press on with seizing and holding territory, it evacuated more rebel fighters from the last opposition-held district of Homs, which would complete the government’s recapture of the central city, now largely reduced to ruins.

President Bashar al-Assad, helped by Russian air power and Iranian-backed militias, has steadily tightened his grip on the opposition-held eastern areas of Aleppo this year, achieving a long-held goal of fully encircling it this summer.

Capturing the rebel-held half of Syria’s largest city would be the biggest victory of the war for the government side, which has already achieved its strongest position in years thanks to Russian and Iranian support.

The United Nations announced that it was resuming aid deliveries to rebel-held areas on Thursday following a 48-hour suspension to review security guarantees after Monday’s attack on an aid convoy near Aleppo that killed about 20 people.

“We are sending today an inter-agency convoy that will cross conflict lines into a besieged area of rural Damascus,” Jens Laerke, spokesman of the UN Office for the Co-ordination of Humanitarian Affairs (OCHA), told Reuters.

But the president of Iran on Wednesday dismissed that idea, saying it would help Islamic State and Jabhat Fateh al Sham, formerly Jabhat al-Nusra, which was al-Qaeda’s Syrian branch.

Mr Assad has appeared as uncompromising as ever in recent weeks, reiterating his goal of taking back the whole country on the day the US-Russian brokered truce took effect.

The government’s main focus has been to consolidate its grip over the main cities of western Syria and the coastal region that is the ancestral homeland of Mr Assad’s Alawite sect.

On Thursday, about 120 rebel fighters and their families were evacuated from the last opposition-held district of Homs under an agreement with the government by which they were given safe passage to nearby rebel-held areas.

The opposition says such agreements are part of a government strategy to forcibly displace populations from opposition-held areas after years of siege and bombardment.

The fighters, carrying their personal weapons, and their families will head from the al-Waer neighbourhood to the rebel-held northern Homs countryside, then travel on to rebel-held Idlib province, Homs governor Talal Barazi said.