Coptic Christians are targeted as violence takes a sectarian turn

Christians vilified by elements within Brotherhood for Morsi’s ousting 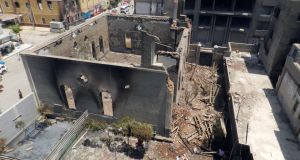 The destroyed Evangelical Church in Mallawi at Minya governorate, about 245 km south of Cairo.

Egypt’s Coptic Christians in provincial cities and towns have been the victims of assault, attacks on their homes and shops, and burnings of cars and churches since the July 3rd ousting of President Mohamed Morsi.

This targeting intensified after the August 14th dispersal of Muslim Brotherhood encampments at Rabaa al-Adawiya Square in Cairo’s Nasr City district and at Nahda Square in Giza, south of the capital, protesting Mr Morsi’s removal.

Nine Christians have, reportedly, been killed, one in Alexandria, seven in al- Nazla, and one in Sohag. Thirty-eight churches were torched and another 23 damaged in the latest round of violence against Christians. Most of these incidents took place in the Minya in upper Egypt, which has a considerable Coptic population, and in Alexandria, Assiut, Beni Suef, Fayoum, Giza, Suez and North Sinai, where radical fundamentalists hold sway.

Destruction
Coptic churches, a convent and other facilities in Minya have suffered most destruction and damage. A Catholic school there was also burned to the ground

In Beni Suef, Brotherhood supporters set a Franciscan school alight and paraded three nuns on the street until they were rescued by a Muslim woman who had taught in the school.

Coptic Catholic Patriarch Ibrahim Isaac Sidrak of Alexandria has refused to characterise these incidents as a “political struggle between different [sectarian] factions”, opting to say the conflict in Egypt is a “war against terrorism”.

Although the Brotherhood said it “stands firmly against any attack, even verbal, against churches”, preachers and politicians who took to the podium at Rabaa al-Adawiya and Nahda, vilified Christians and blamed them for Mr Morsi’s removal.

Free Egyptians party official Ehab Samir told The Irish Times the Brotherhood seeks “scape goats” for its failure to remain in power and has adopted “terrorism” to respond to the 85-year-old movement’s losses. It may be easier for the Brotherhood to single out Christians rather than Muslims.

If the Brotherhood had mounted peaceful demonstrations within the law, there would have been no crackdown by the security forces. “Rabaa [al-Adawiya] was packed with weapons. We are facing a terrorist group. The people are standing together and draw strength from their unity. They don’t want violence in the streets,” said Dr Samir.

‘Secret society’
“If Morsi had behaved as a secular, liberal ruler, this [his ousting] would never have happened.” However, the Brotherhood is a “closed, secret society that cannot compromise” with other forces on the political front.

Dr Samir said the Brotherhood “used religion” as its political standpoint and did not renounce violence although the majority of Egyptians, whose culture is “6-7,000 years old, are moderate..

“I believe most Egyptians do not want to differentiate between Muslims and Copts. To each his own religion. The idea of segregation is an Islamist philosophy adopted by the Brotherhood and the [ultraorthodox] Salafis” and imported into Egypt from Saudi Arabia and the Gulf.

“When you get away from cities, the people are less educated.” In his view, the education system – where many teachers are Brotherhood members and supporters – requires reform.

The liberal Free Egyptians party was established by Coptic business tycoon Naguib Sawiris in 2011 to contest the parliamentary elections and was a part of the electoral alliance opposing the Brotherhood and defending Egypt’s secular society.

Party chairman Ahmed Said has taken over from Muhmmad El-Baradei as spokesman for the 11-member National Salvation Front coalition of secular parties.

In a news release, Amnesty International called on the Egyptian authorities to “take immediate steps to ensure [the] safety” of Coptic Christians. The release quoted Hassiba Hadja Sahraoui, its deputy director for the region, as saying: “It is a shocking dereliction of duty that security forces failed to prevent . . . sectarian attacks and protect Coptic Christians.