Civilians are streaming out of the eastern outskirts of Mosul as Iraq's special forces continue their push in the Islamic State-held city. Mosul has a population of 1.5 million people, much more than any of the other cities captured by Islamic State. 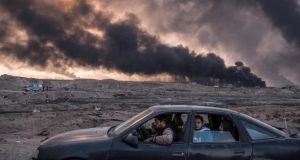 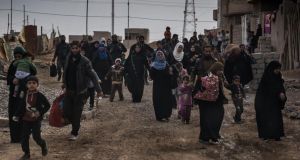 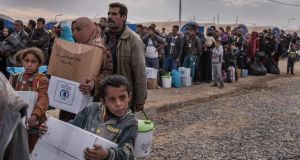 Displaced people wait in line with their possessions to be relocated to other camps at a camp near Mosul for displaced people. Photograph: Sergey Ponomarev/New York Times 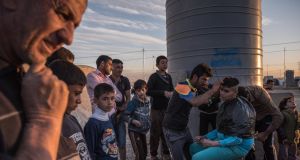 Men gather near a power generator to charge their mobile phones as a barber using electric shaver provides a haircut at the Khazer camp in Iraq. Photograph: Sergey Ponomarev/New York Times 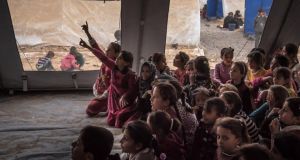 Iraqi children attend school in a camp outside Mosul which it is expected will accommodate thousands of displaced people as the fighting in the Iraqi city intensifies. Photograph: Sergey Ponomarev/New York Times 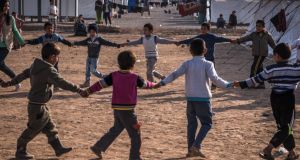 Children play at the Khazer camp for people displaced by the fighting around Mosul. Photograph: Sergey Ponomarev/New York Times 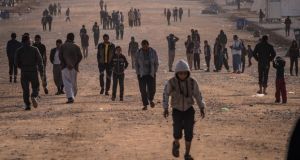 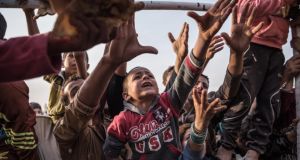 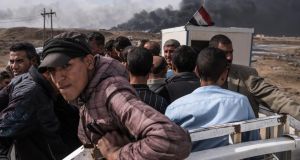 Residents of villages outside Qayyara ride on a truck after they were questioned by Iraqi forces to ensure they were not Islamic State fighters posing as civilians. Photograph: Sergey Ponomarev/New York Times

Each day, dozens of families pick their way out, some carrying white flags even as they come under mortar or sniper fire from Islamic State. Billowing black clouds from oil wells set on fire by militants provide a dystopian background to the scenes of flight; it is so bad south of Mosul that the sheep there have begun turning black.

The military campaign to retake Mosul, Iraq’s second-largest city, is in its sixth week and bogged down in a gruelling fight. Seeking to escape the fighting, more civilians than ever are taking the risk of evacuation, hoping to find help if they can make it past the militants’ gun range. 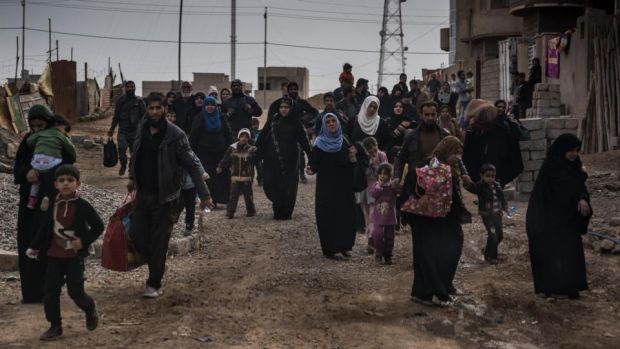 The numbers tell one story: almost 70,000 people have been displaced so far, roughly half of them children, according to the United Nations. But the exodus is really only getting started. There could be a million more people still in Mosul, most clustered on the west of the Tigris river, where the fighting has not reached.

For those who have been able to reach the aid camps miles outside the city, there has been an initial glimpse of hope and relief. Some, such as the displaced Iraqis photographed at the Khazer camp outside Mosul, find that aid workers and soldiers are quick to offer food, handing out biscuits or Iraq’s traditional diamond-shaped bread.

But it is a particularly hazardous journey for military-age men. Fearing that Islamic State fighters will try to escape by posing as civilians, the Iraqi forces are separating men from their families for questioning. In past offensives, the process proved ripe for abuse: the word of an unnamed informant can be enough to send a man to prison, leaving countless families wondering what happened to their husbands and sons. 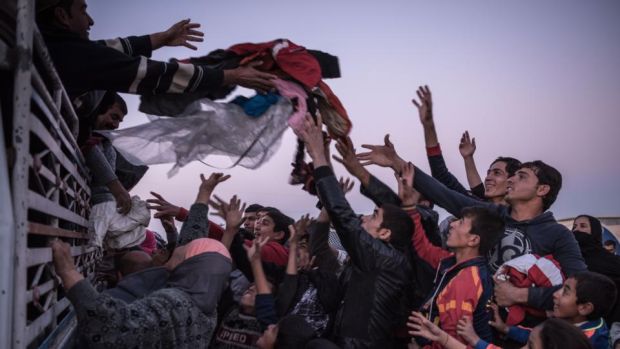 As the war against the Islamic State, also known as Isis, has intensified, more than three million Iraqis – mostly Sunnis – are now thought to be displaced. With most of them still unable to return to their homes even in cities long ago reclaimed from the Islamic State, such as Fallujah and Ramadi, aid camps have had to serve as home.

Amid the worries, there are still touching scenes of reunions at the camps, as family members who had left two years ago are brought together with loved ones who had stayed behind until now. A few weeks ago, Zakea Muhsin (55), from the village of Topzawa near Mosul, saw her husband for the first time in more than two years. She hadn’t even been able to talk with him over those months, as Islamic State had banned communication with the outside world.

“They told us: ‘If we find a cellphone on you, we will behead you,’” she said. But just as often, there is more separation, families cut off from one another amid the chaos of battle. Last week, Awad Abdullah (47), who had left an area south of Mosul and lives in a camp near Irbil, was grief-stricken because he could not find his parents. “I have not heard from them,” he said. “I am always crying.”

As he spoke, an older woman approached with a sad story of a lost daughter. “Nobody knows where she is,” she said. When the battle began, everyone hoped Islamic State would abandon the city, as it had in Fallujah. Instead, it dug in for a last stand.

With the fighting becoming ever more brutal and drawn out, humanitarian workers are concerned that Iraqi forces will adopt more aggressive tactics, putting civilians at greater risk. When the fight started, Iraqi officers feared that Islamic State would destroy the bridges over the Tigris that connect east and west Mosul, cutting off trapped civilians. Now coalition aircraft are knocking the bridges out themselves to prevent Islamic State from bringing supplies and car bombs into the battle-scarred east.

Already, there is talk of an Aleppo-style siege of the city centre. And the United Nations is busily expanding some camps and building more to accommodate perhaps hundreds of thousands more displaced civilians.

Some fear that the increasing number of refugees, and their vulnerability, could bring another wave of sectarian revenge in a country rife with it. Sunni extremists who would later identify with Islamic State forged their identity with the widespread killing of Shias during Iraq’s sectarian civil war last decade, and again when the militant group blitzed across Iraq in 2014, when Mosul and other cities were seized.

But the group’s sectarian focus did not keep it from oppressing Sunni civilians under its rule. Now hundreds of thousands of them are refugees, flowing into areas such as Iraqi Kurdistan, where they are met with suspicion and where memories of abuses under Saddam Hussein’s Sunni Arab oligarchy are still fresh.

Today, the fighting drags on, and each day there are more families trickling out of the battleground in a new Iraqi ritual of coming and going. When the Mosul offensive began in earnest, in mid-October, some US officials quietly expressed hope that it might be wrapped up by the end of President Barack Obama’s term. But most public estimates envisaged a fight stretching over months, and that appears to be coming true.

Many Iraqi officials now predict the Mosul fight could stretch on until the spring, most likely making the battle, and its effect on Iraqi society, part of US president-elect Donald Trump’s inheritance. – (New York Times)