Cameron to seek Iranian support for battle against IS 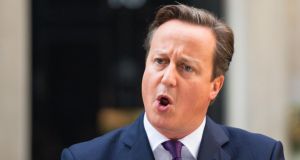 British prime minister David Cameron is to meet the president of Iran in New York today to urge him to join the international effort to tackle Islamic State. Photograph: Dominic Lipinski/PA Wire. 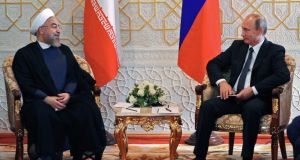 Iranian president Hassan Rouhani (L) and Russian president Vladimir Putin (R) sit for their meet in Dushanbe, Tajikistan, earlier this month. Mr Rouhani will meet David Cameron today in New York in what will be the first bilateral meetings between Britain and Iran since 1979. Photograph; Mikhail Klimentyev/RIA Novosti/EPA.

British prime minister David Cameron is to meet the president of Iran today to urge him to join the international effort to tackle Islamic State.

The meeting with Hassan Rouhani, at a United Nations summit in New York, will be the first time a British prime minister has held face-to-face bilateral talks with an Iranian president since the country’s Islamic revolution in 1979.

The meeting is seen as marking Mr Cameron’s determination to enlist the active support of regional powers in the Middle East in taking on Islamic State, which has seized control of swathes of territory in Iraq and Syria and carried out a string of atrocities against local people and foreigners as it seeks to impose its own brand of extremist Sunni Islam.

Mr Cameron hopes to secure UN approval for a comprehensive strategy to deal with the brutal militant group, and will join US president Barack Obama and other members of the UN Security Council to discuss the threat posed by foreign fighters - thought to include hundreds of Britons - engaged in the conflict.

He will use an address to the UN General Assembly to call on the whole world to come together to offer broad-based support for the new inclusive Iraqi government led by Haider Abadi in Baghdad and to defeat the threat from extreme Islamist groups such as Islamic State, also known as Isis or Isil.

The British ministry of defence said of the action: “Our position in Iraq and Syria is the same. Discussions are ongoing, no decision has been taken to our involvement.”

Britain has been helping supply arms to Kurdish peshmerga fighters taking part in the struggle with Islamic State, as well as offering support to the new inclusive Iraqi government.

Mr Cameron has ruled out putting British “boots on the ground” and it has been unclear whether the UK will join the US and France in air strikes against Islamic State forces.

He said he would want to consult the House of Commons, if possible, before engaging British forces, raising the prospect of a possible recall of Parliament after his return from the US on Thursday.

Czech health chief quits as coronavirus surges in eastern Europe 17:49
Cyprus blocks EU sanctions on Belarus over rigged election 17:17
Deaths of hundreds of elephants may have been caused by toxic algae 16:45
Downing Street denies reports Boris Johnson went on secret Italy trip 16:07
UK warned it could have 50,000 coronavirus cases a day by mid-October 12:19