Call for ‘strong hand’ at Jerusalem funeral of French victims

‘This is not how we wanted to see you come home’, says president Reuven Rivlin 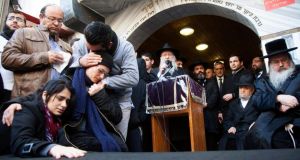 The mother and sisterof Yoav Hattab, killed in an attack on a Paris grocery on Friday, mourn beside a symbolic coffin during a procession in Bnei Brak near Tel Aviv. Photograph: Nir Kafri/Reuters

Thousands of Israelis, including many new immigrants from France, turned out for the funeral in Jerusalem of the four Paris-based Jews killed in Friday’s kosher supermarket siege.

He said the attack on the kosher supermarket “awakens bad memories”, referring to European anti-Semitism of the second World War, and said that 70 years after the end of the war Jews were again afraid to walk the streets of Europe wearing skullcaps.

“The leaders of Europe must act and take a strong hand to bring back the security of the Jews of Europe,” he said.

At the beginning of the sombre ceremony, members of the four victims’ families read the Kaddish mourners’ prayer and lit torches in memory of Yoav Hattab, Yohan Cohen, Francois-Michel Saada and Phillipe Braham. A rabbi used scissors to cut the shirts of the relatives; a traditional sign of mourning.

Israeli and French flags lined the streets of Jerusalem and mourners held up signs reading “Je suis Juif” and “Je suis Israelien” above photographs of the victims.

The service took place at the same cemetery, on a Jerusalem hilltop overlooking the main Tel Aviv highway, where less than three years ago a rabbi and three children, killed when a jihadist gunman attacked a Jewish school in Toulouse, were buried.

Prime minister Binyamin Netanyahu said the four fatalities, like the victims from Toulouse, were killed solely for being Jews.

“Their lives were cut short in an attack of hatred by a lowly murderer. I have been saying for many years and I say it again today: These are not only enemies of the Jewish people, they are enemies of all mankind. It is time for all people of culture to unite and uproot these enemies from our midst.”

Ségolène Royal, the French minister for ecology, sustainable development and energy, bestowed the Order of the Legion of Honour on behalf of the French republic on each of the four victims, vowing that France would not tolerate anti-Semitism and would “unfailingly” fight it.

Jonathan Saada, the son of Francois-Michel Saada, said his father had loved Israel.

“He really wanted to live here, and he will. He’s here now, and I’m sure he’s really happy to be with you here.”

At the end of the ceremony the mourners sang Hatikva, Israel’s national anthem, and filed past the newly-dug graves leaving small stones, the traditional Jewish sign of loss, before departing in silence.