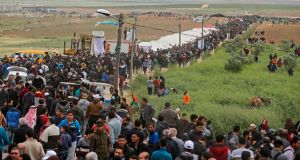 Palestinians marching past a tent city erected along the border with Israel east of Gaza City in the Gaza Strip, to commemorate Land Day. Land Day marks the killing of six Arab Israelis during 1976 demonstrations against Israeli confiscations of Arab land. Photograph: Mahmud Hams/AFP/Getty Images

At least 16 Palestinians were killed on Friday and more than 1,000 injured according to Palestinian sources, as tens of thousands of Gaza Strip residents held protests along the border fence with Israel.

The Palestinians gathered near the border and clashes erupted as protesters hurled rocks and Molotov cocktails at Israeli troops and set tyres on fire.

Dubbed the Great March of Return, Friday’s gatherings were the beginning of six weeks of planned protests to press for the right of Palestinians to return to areas now controlled by Israel. The actions are to culminate in the middle of May when Israel marks its 70th Independence Day and the US is set to hold a ribbon-cutting ceremony inaugurating its controversial new embassy in Jerusalem.

The Palestinians commemorate the day,which marks the Israeli declaration of independence in 1948, as the Nakba, the beginning of the Palestinian refugee problem.

Some 30,000 Palestinians participated in Friday’s protests. The numbers were significantly fewer than the 100,000 Hamas leaders in Gaza had hoped for, but were still enough to provide a headache for the Israeli forces who planned the biggest peacetime deployment along the border to prevent any infiltration into Israel.

The protest took place hours before Jews gathered around the traditional Seder meal table, marking the start of the one-week festival of Passover. Many soldiers had their holiday leave cancelled and the entire area along the border was declared a closed military zone.

According to the United Nations, some 1.3 million of Gaza’s 1.9 million residents are refugees or their descendants. Hamas leader Ismail Haniyeh addressed the protesters at the border and told them the Palestinians would continue to struggle for the right of return.

“This march is the beginning of the return to all of Palestine. We will not relinquish one inch of our blessed land. The Palestinian people today are sending a clear message to US president [Donald] Trump – we will never relinquish Jerusalem.”

The Palestinian Authority (PA) said the Israeli government was fully responsible for the “assaults” on Palestinians.

Yusef al Mahmoud, a spokesperson for the PA in Ramallah, called for “immediate and urgent international intervention to stop the shedding of the blood of our Palestinian people by the Israeli occupation forces”.

“We are identifying attempts to carry out terror attacks under the camouflage of riots. We urge citizens to stay away and warn the Hamas terror organisation, which is responsible for the violent riots and everything taking place under its auspices.”

Israel accused the organisers of deliberately sending children to the border fence and said most of the casualties quoted by Palestinian sources were caused by tear gas and not live fire.

The Israeli military dropped leaflets from aeroplanes and used social media to warn Palestinians not to try to breach the security fence during the protests. Defence minister Avigdor Lieberman warned that any Gaza residents approaching the border were putting their lives at risk.

Knesset member Tamar Zandberg, head of the left-wing opposition Meretz party, urged the army not to use live fire. “The army has a right to use means to disperse the protest to prevent infiltration, but that must not lead to using live rounds against unarmed protesters,’’ he said.

Friday was chosen as the day to start the protest as it marks Land Day, the anniversary of clashes in 1967 when six Israeli Arabs were killed in clashes in the Galilee. Smaller-scale protests were also held in a number of locations across the West Bank.