Arts renaissance in Iran, where criticism is expressed in metaphors

Art market took off under Ahmadinejad; and Rouhani has eased conditions 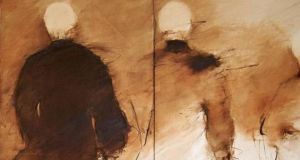 The figure of Mohammad Mossadegh, the prime minister of Iran who was overthrown by the CIA and MI6 in 1953, continues to haunt Iran, as in this painting by Farideh Lashai. Photograph: Nazanin Paykar-Ara

A tall, ravishing brunette with a superior air, drenched in Chanel 5, greets visitors to a gallery opening in north Tehran. Women flaunt their long tresses, wear stilettos and show their legs. Men and women shake hands, even kiss one another in greeting.

One might find the same crowd in London, Paris or New York – all cities which hosted Iranian exhibitions this past year. The art is “threaded through with human drama and composed of work that is both cosmopolitan and like no other art”, the New York Times critic wrote.

Tehran’s flourishing arts scene is a reminder that many westernised, upper middle-class Iranians have stayed – or returned – through 35 years of Islamic revolution.

“Iranians love their country regardless of who is in power,” says Nazanin Paykar-Ara (34), a professional photographer of contemporary art. “I have a British passport, so I can live anywhere I want to, but I would rather stay here . . . These artists create because it’s difficult. This Islamic period is an amazing part of our history. I want to see what is going to happen.”

Affluent Iranians flock to the vernissages every Friday afternoon. Most galleries show safe, decorative abstract art, still lifes or calligraphy. But close to one third of an estimated 150 galleries show socially and politically charged art, says Aria Kasaei, who designs a monthly guide.

There are several explanations for what is being called a renaissance in Iranian arts. “The number of arts faculties has increased from five to 30 in 15 years,” says gallery owner, art professor and painter Rozita Sharaf Jahan.

Ironically, the art market took off under the previous, repressive president Mahmoud Ahmadinejad. Big banks like Pasargad began buying up art as an investment, and for the prestige of being patrons. Members of government, the families of clergy and the nouveau riche class that sprang up since the 1979 revolution joined in the trend.

“Art is a passport to the sophisticated class,” says Ali Baktiari, a curator of contemporary Iranian art who works in Tehran, Dubai, Europe and the US. “If you want to hang out with poets or writers, they don’t accept you easily. If you say, ‘I’m a collector of contemporary art’, it opens doors.”

Alireza Sami Azar, the former director of Iran’s museum of contemporary art, encouraged Christie’s, Sotheby’s and Bonhams to auction Iranian art in Dubai. Last month, an auction at Tehran’s Azadi Hotel was a resounding success, with canvases fetching hundreds of thousands of dollars.

Under current president Hassan Rouhani, conditions have eased. Publishers that were banned, the arts institute and cinema guild have all reopened over the past year. Listing his accomplishments on the first anniversary of his election, Rouhani said, “In the arts sector, one sees joy and movement.”

Yet much of the arts community continues to struggle for authorisations from the ministry of culture and Islamic guidance. Bahman Ghobadi’s banned film Persian Cats told of the tribulations of an independent rock group trying to organise a concert. Granaz Moussavi recounts a similar tale about the theatrical milieu in My Tehran for Sale.

Film director Asghar Farhadi has been most adept at working around censorship laws in his poignant dramas of Iranian middle-class life. His 2011 film A Separation won the Oscar for best foreign film. Bérénice Bejo won the best actress award at Cannes this year for her role in Farhadi’s subsequent film, The Past.

But the hardliners haven’t given up. Leila Hatami, the star of A Separation and the Iranian actress best known outside Iran, was on the jury of this year’s Cannes festival. When the ageing head of the festival, Gilles Jacob, kissed Hatami on the cheek, it caused outrage in Tehran, and she was forced to apologise.

Jafar Panahi, one of Iran’s finest directors and the winner of many awards at international film festivals, was arrested in 2010 and held for several months. His films about discrimination against women enraged authorities. And he was believed to have been making a film about the repression of the 2009 protests. Panahi was sentenced to six years in prison, and banned from making films, travelling abroad or giving interviews for 20 years. Iranian intellectuals hope Rouhani’s administration will clear him.

“There are limits, but when you work here, you adapt,” says Aria Kasaei, the gallery guide designer. “You say what you want to, but not explicitly. We’ve had authoritarian regimes in Iran for 1,000 years, so there’s a tradition of subtlety and metaphor.”

A recent exhibition at Shirin Art Gallery, titled Black Gold, took petroleum as its theme. It included paintings of Mohammad Mossadegh, the prime minister who was overthrown by the CIA and MI6 in 1953 after he nationalised Iranian oil, a replica of Farah Pahlavi’s tiara with an oil spigot on the top, and a statue being fed oil intravenously.

Some artists refuse to sublimate their message. The Haerizadeh brothers, Rokni and Ramin, live in exile in Dubai. Ramin has done a series of self-portraits disguised as a mollah with blood-dripping hands. Rokni caricatured Iranian security forces with the heads of Mickey Mouse, a pig or a bear, wielding batons and stun guns during the 2009 riots.

Rozita Sharaf Jahan founded the Azad gallery 15 years ago as a showcase for young talent. She holds court in her back office; the Gertrude Stein of present-day Tehran. Sharaf Jahan has never clashed with the authorities, though her themes can hardly please them.

“I don’t make art for beauty or enjoyment,” she says. “For me, protest is the most important attribute of art. My lifestyle is my way of protesting.”

Sharaf Jahan often superimposes objects on self-portraits: bullets signified her objection to political violence in the 1980s. A montage of wristwatches commemorates a mass execution at Evin Prison in 1999, when prisoners put their belongings in plastic bags before being hanged. Photographs of young men, embellished with paint and embroidery, are Sharaf Jahan’s personal protest at the Islamic Republic’s use of teenage soldiers, and its execution of minors. (Series concluded)