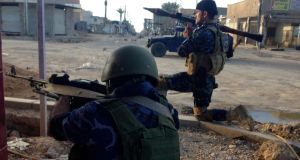 Iraqi security forces take position with their weapons during clashes with the Islamic State in Iraq and the Levant (ISIL) in province of Anbar on Saturday. Photograph: Reuters

Al-Qaeda’s general command said today it had no links with the Islamic State in Iraq and the Levant (ISIL), in an apparent attempt to reassert its authority over fragmented Islamist fighters in Syria’s civil war.

After a month of rebel infighting, al-Qaeda disavowed the increasingly independent ISIL in a move likely to bolster a rival Islamist group, the Nusra Front, as al-Qaeda’s official proxy in Syria.

The switch is seen as an attempt to redirect the Islamist effort towards unseating president Bashar al-Assad rather than waste resources in fighting other rebels, and could be intended to shift the strategic balance at a time when government forces are increasingly active on the battlefield. It could also embolden Nusra in its dispute with ISIL.

Overall, the three-year-old war however remains largely deadlocked, with Syria fragmented into areas controlled by the warring parties.

ISIL has fought battles with other Islamist insurgents and secular rebel groups, often triggered by disputes over authority and territory. Several secular and Islamist groups announced a campaign last month against ISIL.

The internecine fighting - some of the bloodiest in the war so far - has undermined the uprising against Dr Assad and dismayed Western powers pushing for peace talks between the government and opposition.

Rebel-on-rebel violence in Syria has killed at least 2,300 this year alone, according to the Syrian Observatory for Human Rights monitoring group.

ISIL follows al-Qaeda’s hard-line ideology and, until now, the two groups were officially linked. Many foreign fighters and ISIL observers, however, say that al Qaeda central and ISIL had in fact been effectively separated since before the group, which was originally the al-Qaeda branch in Iraq, spread into Syria.

Hard-line Islamist rebels, including Nusra, have come to dominate the largely Sunni Muslim insurgency against Dr Assad, who is supported by his minority Alawite sect - an offshoot of Shia Islam - as well as Shia fighters from Iraq and Lebanon’s Hizbullah.

“...(Al-Qaeda) does not have an organisational relationship with it and is not the group responsible for their actions.”

A Nusra commander in northern Syria told Reuters that the statement meant that his group’s position was no longer one of neutrality.

“Now we are going to war with ISIL and will finish it off once and for all,” he said on condition of anonymity.

Charles Lister, visiting fellow at Brookings Doha Center, said the al-Qaeda statement “represents an attempt by al-Qaeda to definitively re-assert some level of authority over the jihad in Syria” following a month of fighting and ISIL disobedience.

“This represents a strong and forthright move by (al-Qaeda) and will undoubtedly serve to further consolidate Jabhat al-Nusra’s role as al-Qaeda’s official presence in Syria.”

But ISIL is proving a strong force. On Sunday, ISIL fighters freed more than 400 people from a prison in northern Syria who had been held by the rival Islamist Liwa al-Tawhid unit, the Syrian Observatory said.

It added that in the eastern province of Deir al-Zor, ISIL seized the Koniko gas field from the Nusra Front and other Islamist rebels who had controlled it for several weeks after wresting it from tribal gunmen. Koniko is one of the largest gas plants in Syria.

A fighter from a rebel group that has clashed with ISIL said the gas field was worth hundreds of thousands of dollars a week in output.

ISIL and its Iraqi predecessor have been a source of controversy among Islamists for many years.

The group alienated many in its strongholds in Iraq’s western Anbar province during its period of control there after the 2003 US-led invasion by imposing harsh punishments based on its severe interpretation of Islamic law and staging attacks with heavy civilian death tolls.

ISIL has been using similar methods in Syria. Yesterday, an amateur video on the Internet showed ISIL fighters publicly decapitating a man in Syria believed to have been a pro-government Shia fighter.

In Iraq, army troops and allied tribesmen killed 57 ISIL fighters in Anbar province today, the defence ministry said, in advance of a possible assault on the Sunni rebel-held city of Falluja which has been under the control of militants, including ISIL, for a month.

Iraqi prime minister Nuri al-Maliki had held off an all-out offensive to give local tribesmen a chance to expel the militants themselves.