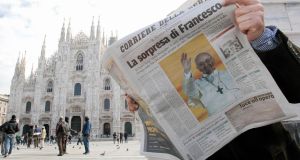 NEW YORK TIMES : “With a puff of white smoke from the chimney of the Sistine Chapel and to the cheers of thousands of rain-soaked faithful, a gathering of Catholic cardinals picked a new pope from among their midst,” writes Rachel Donadio from the Vatican City.

Ms Donadio even provided a brief elocution lesson for those who are having problems pronouncing the 266th Pontiff’s former name. It’s Ber-GOAL-io, in case you were wondering.

She spoke to one man with a crucifix-wielding child on his shoulders, who said the announcement was “like waiting for the birth of a baby, only better”.

WASHINGTON POST : “We have a new Pope,” announced Dylan Matthews. In the second paragraph, Mr Matthews says that the former Cardinal Jorge Mario Bergoglio was not exactly the bookies favourite. He mentions that Bergoglio had a 2 per cent chance with Paddy Power and an even more meager 0.7 per cent chance with Betfair.

The article further discusses Pope Francis ’ social and political ideologies, such as his vehement opposition to gay marriage in his native Argentina and his opposition to austerity.

BUENOS AIRES HERALD : The Argentinian capital’s English language paper said their local cardinal was a surprise choice and now has the job of leading the “troubled” Church.

The article mentions that frontrunners included Brazil ’s Odilo Schere and Italy ’s Angelo Scola, who would would have been the first Italian Pope in 35 years. It adds that Bergoglio was not on the list of expected candidates. as it was perceived that the new pope would be younger. Pope Francis is 76 and the first Jesuit to become Pope.

The unnamed journalist adds that amongst his challenges as head of the Roman Catholic church are “rivalry from other churches, the advance of secularism, especially in its European heartland, and allegations of scandal at the Vatican bank.”

THE GUARDIAN : Guardian staff tell us 13 key facts about Pope Francis’ life, such as he likes travelling on the bus and he trained to be a chemist. Also, he told fellow Argentinians not to travel to the Vatican City were he elected Pope, but rather to donate money to the poor and was believed to be the runner-up at the last papal conclave in 2005.

The article goes on to inform us that he has lived for more than 50 years with the function of only one lung, as the other was removed because of infection.

LA REPUBBLICA : In their article on the new pontiff, Alessia Manfredi and Valeria Pines begin with the traditional address to signify a new leader. “Habemus Papam.” We have a Pope. They explain the symbolism behind dressing the Pope for his first public address. The cossack, without a stole, is a sign of humility.

They go on to say that Francis begged not to be elected as Pope at the last conclave and was almost in tears. The journalist say that may have been for health reasons. Archbishop of New York Timothy Dolan confirmed at a press conference afterwards that the name was chosen in honour of St Francis of Assisi.

LE MONDE : According to journalists in Le Monde, Pope Francis is going to have a very busy few days ahead of him after his life changed on Wednesday night. Amongst his initial duties is a private visit to the basilica of Saint Mary Major in Rome, where he says he will pray to Mary to protect the city. Following that he will lead a mass in the Sistine Chapel with the 114 Cardinals were gave him his position.

On Saturday, Pope Francis will meet with a variety of journalists and communication officers, which is a recent tradition. The following day, he will recite the Angelus in the traditional papal apartment.

HERALD SUN : This Australian newspaper says having only one lung won't stop Pope Francis from shying away from a challenge. His authorised biographer Sergio Rubin said his lung function may not be at its best these days, but it will only slow him down a little bit.

The director of the Centre for Respiratory Infection at Imperial College London Peter Openshaw added the 76-year-old Pope with one lung may not be able to run marathons, but adds they may be not be on the Pontiff’s list of priorities.

DIE ZEIT : “A man from the new world takes over Rome”, say Germany ’s Die Zeit newspaper. The report states the “Eurocentrism” of the papacy was broken by the first election of a Pope from the Americas, adding the world church will now be heavily influenced by Latin America ’s Catholicism.

THE HUFFINGTON POST : Jessica Elgot of the Huffington Post UK said the new Pope is a staunch defender of Argentina’s rights to the Falkland Islands. According to the reports, he once told a congregation to “go and kiss the land which is ours”.

"There are angels who will accompany you, who are sons, husbands and fathers of yours, who fell there, in an almost religious movement, of kissing with their blood the native soil."