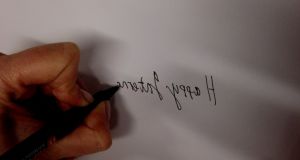 Mirror writing: left-handers are celebrating a day of being left-handed.

It’s perhaps no more than a gimmicky celebration, but today, August 13th, is devoted to International Left Handers Day – when lefties everywhere get a special date to themselves to moan about how everything in the world is designed for right-handed people.

They will also use it to proclaim their (reputed) over-representation in artistic and creative careers and will bore their friends by reeling off lists of celebrity left-handers.

Up to 15 per cent of people are left-handed – with males more likely to be left-handers than females.

The Left-Handers Club launched the event on August 13th 1992, making today the 22nd such celebration of sinistrality.

Among the claims the organisation makes for left-handers are that they are better drivers (six out of 10 left handers in an AA study passed their tests first time, making them 10 per cent more likely than right-handers to pass at first attempt).

Products made especially to ease the daily lives of those of sinister persuasion include scissors, tin-openers, corkscrews and left-handed notepads with the spine on the right.

A quick straw-poll in the Irish Times newsroom early this morning indicated about 70 per ccnt people present were left-handed.