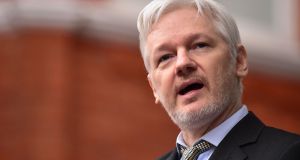 Julian Assange has been granted political asylum by Ecuador and has been living inside the embassy for over four years. Photograph: Dominic Lipinski/PA Wire

WikiLeaks founder Julian Assange faced questioning on Monday by prosecutors at the Ecuadorian embassy in London, where he has been holed up for four years, over allegations he committed rape in 2010.

Swedish chief prosecutor Ingrid Isgren arrived at the embassy to pose questions to Mr Assange through an Ecuadorian prosecutor over the allegations which Assange has denied, a Reuters photographer at the scene said.

Mr Assange, who enraged the United States by publishing hundreds of thousands of secret US diplomatic cables, took refuge in the embassy in August 2012 to avoid being extradited to Sweden over the rape allegation.

The 45-year-old Australian has refused to go to Sweden for questioning, saying he fears further extradition to the United States, where a criminal investigation into the publication of secret documents by WikiLeaks is ongoing.

In 2010, WikiLeaks published thousands of classified US military and diplomatic documents in one of the largest information leaks in US history.

Ms Isgren and a police investigator will be able to ask questions through the Ecuadorian prosecutor, who will later report the findings to Sweden, prosecutors have said.

“After the report, the Swedish prosecutor will take a view on the continuing of the investigation,” they said.

A Swedish appeals court decided in September to uphold Mr Assange’s arrest warrant, saying a strong public interest argument outweighed a case to set it aside based on the lengthy deadlock and a previous lack of impetus in pursuing the case.

Mr Assange’s request to have the warrant overturned came after a UN panel in February said his stay at the Ecuadorean embassy equalled arbitrary detention, that he should be let go and be awarded compensation.

Even if Sweden drops the investigation, however, Mr Assange could be arrested for breaching bail conditions in Britain.