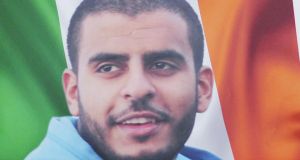 Ibrahim Halawa (19), from Firhouse in Dublin, was arrested after a protest in Cairo. He has described his desperation in a smuggled letter from prison and his family fear it is indicative of his mental state. Photograph: Aidan Crawley

The family of Ibrahim Halawa say his decision to go on hunger strike has come in the aftermath of the seventh and latest adjournment of his trial.

Mr Halawa (19), from Firhouse in Dublin, was arrested after a protest in Cairo in August 2013 and has been refused bail. He has described his desperation in a smuggled letter from prison and his family fear it is indicative of his mental state.

The most recent adjournment in his case came when 16 co-defendants were sitting prison exams and could not attend court. The potential retirement and replacement of the trial judge has also led to concerns about delays.

“I think he just can’t take it any more,” his sister Somaia Halawa said after receiving his letter. Mr Halawa’s mother is in Cairo but is separated from him on visits, a restriction his family says is not applied to others. “There are all of these questions. We don’t know why he is being treated differently, even though he is an Irish citizen,” Ms Halawa said.

Aware the Government was attempting to help, she said the family understood it could not intervene until a court decision was made. In the meantime, they remain deeply concerned for Mr Halawa’s physical and mental wellbeing.

Mr Flanagan had raised the case several times with the Egyptian government and at EU level, expressing a strong wish for Mr Halawa’s return.