Hong Kong leader Carrie Lam says Hong Kong is equipped to handle current unrest on its own, but refuses to rule out Chinese intervention. Video: Reuters 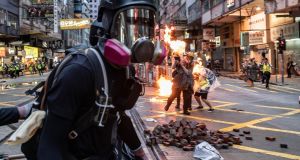 Members of the media were hit by Molotov cocktails during a clash between protesters and police at a demonstration in Hong Kong’s Wan Chai district on Sunday. Photograph: Anthony Kwan/Getty Images

A People’s Liberation Army barracks in Hong Kong issued warnings on Sunday for the first time since protests began in the city four months ago, while tens of thousands of masked demonstrators marched in defiance of a new face-mask ban enacted over the weekend.

Despite pouring rain and the shutdown of large parts of the city’s metro system, protesters clogged the streets on both sides of Hong Kong’s harbour to vent their fury at the government’s use of colonial-era emergency powers to introduce a ban on facial coverings at public gatherings.

They chased down and cuffed several protesters, taking them away on police busses.

After demonstrators shone laser pens at the People’s Liberation Army’s (PLA) barracks in Kowloon Tong on Sunday night, a yellow warning sign was raised from the roof and audio warnings came from inside the base telling the protesters to disperse immediately or they would face prosecution.

Men in camouflage uniforms in the army compound shone bright spotlights on the demonstrators below, marking the first time China’s military has reacted to the protests since they began in early June.

While they are typically confined to barracks, there are currently an estimated 10,000 Chinese mainland troops in Hong Kong, according to recent media reports – more than double the number stationed in the city before the protests began.

The anti-mask law came into force on Saturday, with the government invoking a 1922 emergency ordinance which gives the city’s chief executive, Carrie Lam, sweeping powers to enact “any regulations whatsoever”. Immediately after she announced the ban protesters took to the streets and ground the central business district to a standstill.

On Sunday afternoon, Hong Kong’s high court rejected a request for an injunction blocking the ban, brought by a group of pro-democracy lawmakers who argued the government acted unconstitutionally in bypassing the legislature to issue the law.

Legislator Dennis Kwok told the court the challenge was about “authoritarianism versus the rule of law”. The lawmakers requested a judicial review of the legislation, and another hearing is set for the end of the month.

Since the protests began, people have been wearing surgical masks to conceal their identities and gas masks to protect themselves from tear gas. On the streets on Sunday, there was widespread defiance of the ban.

“Carrie Lam is really stupid,” said one masked protester who gave her name as Emma. “These protests started because she wanted to push through an extradition Bill everyone hated. Now she thinks she can get away with this draconian law, which is even worse – emergency powers to let her make up any law she likes.”

While the proposed extradition law that sparked the demonstrations has now been withdrawn, the protest movement has evolved into a wider movement demanding the protection of Hong Kong’s autonomy.

On Saturday, Hong Kong was eerily quiet for much of the day as malls were closed, shops on the streets shuttered and the MTR, the expansive subway system, was closed for the first time in its 40-year history after the majority of its 94 stations had been vandalised and subjected to arson attacks the night before.

The MTR has incurred the protesters’ wrath as they accuse its management of colluding with the police and shutting off services at key times that have left demonstrators vulnerable to arrest and, on one occasion, triad attack.

There is currently no sign of a way through the political impasse, and as the violence continues to escalate two teenage protesters have been shot with live ammunition this week. Both are reportedly in a stable condition.

A frontline protester said on Sunday night they were now more resolute than ever. “We are not going anywhere, we are going to keep protesting, keep on fighting,” he said. “The police are starting to shoot us in the streets. This might be the last chance we have to fight for Hong Kong.”

When asked about the possibility of the PLA coming out of their barracks and challenging them on the streets, he said: “Great! That’s what we want. We want the world to see what the Chinese government is really like.”