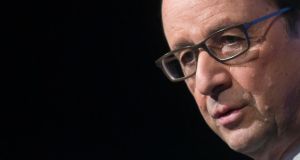 President Francois Hollande delivers his speech during a visit at the Institut du Monde Arabe (Arab institute) in Paris, on Thursday. Seventeen people were killed last week in attacks which included the offices of the satirical French weekly Charlie Hebdo. Photograph: Reuters

President Francois Hollande assured Muslims in France and abroad on Thursday that his country respected them and their religion but would not compromise its commitment to freedom and democracy.

Speaking a week after three days of Islamist militant violence that killed 17 people in Paris, he told a meeting at the Institute of the Arab World in Paris that Muslims were “the first victims of fanaticism, fundamentalism and intolerance”.

His speech struck a careful balance between France’s commitment to protect its five-million-strong Muslim minority, Europe’s largest, and to uphold the principle of free speech even for caricatures that Muslims find offensive.

Authorities in several Middle East countries have denounced the newspaper’s decision to print more cartoons of the Prophet Mohammad in its first post-attack edition on Wednesday.

“Islam is compatible with democracy and we should refuse any confusion (about this),” Mr Hollande said at the Institute, where the slogan: “We are all Charlie” was written in French and Arabic on the building’s facade.

“French of the Muslim faith have the same rights and duties as all citizens,” he said, and should be “protected and respected, as they should respect the republic.”

Also on Thursday, the French military’s cyberdefence specialist reported a surge of hacking against 19,000 different French websites in the past four days, mostly denial of service attacks. Websites of all kinds were affected, he said.

“This is the response to last Sunday’s march by people who do not share our values, ranging from shocked believers to hardened terrorists,” vice admiral Arnaud Coustilliere told journalists, referring to a mass protest march led by Hollande and more than 40 world leaders.

Mr Hollande also addressed the Arab world, saying: “France is a friend, but it is a country that has rules, principles and values. One of them is not negotiable - freedom and democracy.”

He said Paris would propose new measures to reinforce cooperation between Europe and Arab states around the Mediterranean, including letting more Arab students study in France.

Freshly printed copies of Hebdo’s “survivors’ edition”, which ran a cartoon of Mohammad on the cover holding a “Je suis Charlie” sign, quickly sold out on Thursday morning, as they did on Wednesday when the weekly first hit the newsstands.

Five victims of last week’s violence were buried in ceremonies on Thursday covered on national television.

In Belgium, prosecutors said they were investigating whether an arms dealer there had provided an Islamist gunman the bullets he used to kill four Jewish hostages at a kosher grocery store.

Sweden should have done more to combat coronavirus, health chief says 10:51
Pope Francis condemns racism and street violence in US 10:20
Trudeau lost for words when asked about clearing of protesters for Trump photo 09:55
Chinese doctor’s death from Covid-19 prompts anger over lack of protection for hospital staff 09:17
Cyclone Nisarga makes landfall near Mumbai as storm surge threatens to flood slums 11:46