The president and his predecessor had not met since June 2012 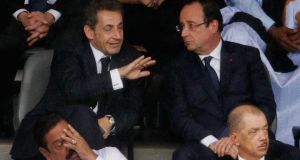 When French president François Hollande invited his predecessor Nicolas Sarkozy to accompany him to South Africa for Nelson Mandela’s funeral, the invitation was hailed as a “republican gesture”. French prime minister Jean-Marc Ayrault cut short an official visit to China so the presidential Airbus A330 – which Mr Sarkozy had purchased as president – could fly them to Soweto.

Travel arrangements soon became complicated. Mr Sarkozy and Mr Hollande loathe one another, and had not met since June 2012. Mr Sarkozy has called his successor “a zero” and “a ridiculous little fat man who dyes his hair”.

If he had had to fly with Mr Hollande in the Airbus, Mr Sarkozy would not have made the trip, a source close to Mr Hollande told Le Figaro. “The thought of seeing the president sleep in ‘his’ bed – because Sarkozy still thinks it’s his bed – didn’t excite him.”

Mr Sarkozy’s entourage said the former president posed no conditions, but admitted that for the two men to have spent a 10-hour, overnight flight together “would have been awkward for everyone”.

Three jets used
In the end, it took three French government Falcon jets to transport the two presidents and the rest of the French delegation to South Africa. (It is customary for a back-up jet to follow the presidential aircraft.)

Politicians and commentators began carping about the extra cost to French taxpayers, all the more so when it was revealed that Barack Obama, Bill and Hillary Clinton flew together on Air Force One. “For puerile reasons of sensitivity and seniority, of ill-placed pride, the two men are incapable of travelling in the same aircraft,” journalist Thomas Legrand said on France Inter radio.

The Élysée claimed it was cheaper to send three Falcons than one Airbus. It appears to be correct. Bernard Chabbert, the aeronautics consultant for Europe 1 radio, said the return trip in the Airbus would have cost €370,000, while three Falcons cost about €230,000.

The former head of the French communist party, Robert Hue, was included in the French delegation. The party supported Mr Mandela and the ANC long before other political parties. Though he later grew close to Mr Mandela, Jacques Chirac was for a time swayed by Margaret Thatcher’s lenience towards the apartheid regime.