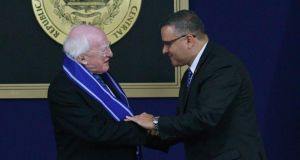 Margaretita Chicas lost her husband in the mass killing in the rural village of El Mozote in December 1981 when Salvadoran government soldiers massacred more than 1,000 people, including 450 children.

Troops from the disbanded Atlacatl battalion attacked villagers over three days in seven communities in the Morazan region where El Mozote is located, 200km northeast of San Salvador.

Chicas attended the lecture at the University of Central America on Thursday night where President Michael D Higgins, returning to El Salvador 31 years after his fact-finding mission to investigate the massacre, spoke about allowing the “work of memory” to take place so atrocities are never forgotten.

“It is very, very important that he has come but the most important thing is that we must never forget and he is helping us to remember that,” she said, speaking through an interpreter, Sr Anne Griffin, a nun living in El Salvador originally from Co Tipperary.

An estimated 80,000 people lost their lives in the civil war between government forces, backed by right-wing death squads and left-wing guerrillas, that torn the country apart between 1980 and 1992.

The government was supported by the Reagan administration in Washington, which feared the emergence of another communist state in their backyard. That support included vast quantities of weaponry.

The El Mozote massacre, denied for years, was only acknowledged by the Inter-American Court of Human Rights last December. The court found El Salvador’s government guilty of the atrocity.

El Salvador’s president, Mauricio Funes, apologised on behalf of the Salvadoran state in January 2012 when he referred to El Mozote as the worst massacre of civilians in modern Latin American history.

“It is impossible to forget this,” said Chicas. “We are beginning to remember it now.”

Another survivor at the university on Thursday for the President’s visit hid in a cave with her husband and children for six years after many members of her family were killed at El Mozote.

For many years afterwards, people who fled El Mozote could not say where they were from – they would be considered rebels or communists and beaten or worse if they did.

“They spent their whole lives being rejected and hidden,” she said.

Remembering is difficult as educating young Salvadorans about their recent dark past risks dividing this generation, given how children of the military and guerrillas share the same classrooms.

“We don’t want to cause division but we have to write the history and we have to remember,” she said.

The court directed last year that the massacre be included in El Salvador’s national curriculum. To that end, Sr Griffin was involved in the publication of a history book about what happened at El Mozote, aimed at 12- to 14-year- olds.She is not the only Irish missionary involved in telling the story .

The Poor Clare sisters from Harold’s Cross in Dublin and Newry were also based in the area at the time and fed information about the killings out of the country, including to Higgins, then a Labour TD.

Fr Gerry Moore, who attended Mr Higgins’s lecture, was in the city of Gotera, about two hours down the mountains from El Mozote, when he heard stories about the massacre.

“People were coming down, fleeing from the hills and they were telling us that terrible things were happening up around the Mozote area, that they were killing women, children, animals, everything – burning all the crops,” he said. The work by the religious orders put them in the firing line.

Before his speech, Mr Higgins visited the Rose Garden on the university campus where six Jesuits, including two priests who had studied and worked in Ireland, were murdered by government fighters. They also killed their housekeeper and her 16-year-old daughter.

Mr Higgins recalled meeting “a high-ranking, ill-informed foreign observer” based in San Salvador in 1981. Jabbing a map, he told the him: “With the Jesuits, it begins with literacy, then it’s co-operatives, but we all know it ends up with Marxism!” Relating the story to The Irish Times, Mr Higgins gave away the observer’s obvious allegiance by mimicking his American drawl.