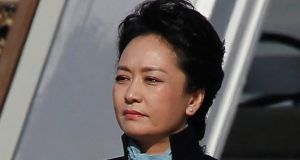 
Freshly installed Chinese president Xi Jinping embarked on his maiden overseas tour as China ’s leader yesterday, starting in Russia before heading to Africa, a hugely symbolic tour that underlines China’s desire to ensure its energy supply while showing defiance in the face of Washington ’s efforts to boost its influence in Asia.

In China, however, the big news about Mr Xi’s first trip as president has not been about energy, investment or Brics (Brazil, Russia, India, China and South Africa ). It’s been about his wife, Peng Liyuan ’s, first public appearance at his side.

Ms Peng is a hugely popular figure in China and adored by millions for her stirring renditions of folk tunes in army uniform or ethnic gear. The first lady kept it understated for the visit to Moscow, wearing a mid-length black coat as she and her husband waved to the press corps on landing.

“Peng Liyuan has a very positive meaning for China. China needs a female role model. Imagine what would it be like if China had a first lady like Michelle Obama, ” wrote one online fashion commentator.

Since the cult of personality that built up around chairman Mao Zedong, the Communist Party has sought to avoid making its leaders too personal, and solid, dull technocrats have run the show, with wives even less visible. Independent analyst Mao Yushi said it remained to be seen how Ms Peng’s role defined itself.

“China and Russia are the main and most important strategic partners,” Mr Xi (59) told Russian media. He said he was eagerly anticipating his meeting with Russian president Vladimir Putin.

“In many ways we speak a common language,” he said.

Russia is one of the world’s biggest energy producers, and China the top energy consumer and these realities tend to outweigh the traditionally tense relations between them.