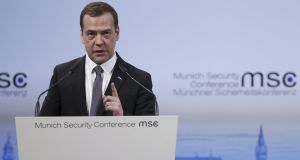 Russia is in a new Cold War with the US and its allies, prime minister Dmitry Medvedev has said.

Speaking at a security conferece in Munich on Saturday, where efforts are being made to find a resolution to Syria’s civil war, Mr Medvedev said the “political line” of Nato towards Russia remained “unfriendly and closed”.

“It can’t be said more sharply: We have slid into a time of a new Cold War,” he said.

Mr Medvedev scoffed at what he said was a suggestion that Moscow may use nuclear weapons in a first strike, saying: “Sometimes I wonder if it’s 2016 or if we live in 1962.”

The conference is also discussing the armed standoff in eastern Ukraine and making progress toward lifting European economic sanctions against Russia.

Mr Medvedev called for sanctions on Russia implemented after it annexed Crimea from Ukraine in March 2014 to be lifted, saying they were “a road that leads nowhere”.

Earlier in the day, he suggested the West would harm itself if it did not lift the sanctions soon. “The longer the sanctions continue, chances for the Europeans to keep their position at the Russian market as investors and suppliers are fading. That’s why one has to act quickly.”

“Russia’s rhetoric, posture and exercises of its nuclear forces are aimed at intimidating its neighbours, undermining trust and stability in Europe, ” Mr Stoltenberg told the conference. “We strive for a more constructive and more cooperative relationship with Russia.”

Nato on Wednesday approved reinforcements for eastern Europe, including stepped-up troop rotations on its eastern flanks and more naval patrols in the Baltic Sea. In response, the Kremlin dismissed the alliance’s argument that the move was merely defensive.

He cited the risk of “accidents,” such as Turkey’s downing of a Russian jet which it said crossed into its airspace in November.

“We are in a new reality with Russia,” said Mr Stoltenberg. “It’s essential we engage with Russia.”

Mr Medvedev said relations are still better than during the depths of the Cold War before the fall of the Berlin Wall and the collapse of communism. He cited past and present examples of cooperation with Nato countries including offensive-arms reductions, the nuclear deal with Iran and the Paris climate accord.

“Differences are not as profound as 40 years ago when the Helsinki accords were signed, when there was still a wall separating Europe,” Mr Medvedev said.

He also denied accusations that his country’s forces have bombed civilians in Syria, saying this was “just not true”.

“There is no evidence of our bombing civilians, even though everyone is accusing us of this,” he said, moments after French prime minister Manuel Valls said Russian bombing of civilians must stop.

“Russia is not trying to achieve some secret goals in Syria. We are simply trying to protect our national interests,” Mr Medvedev said, adding that Moscow wanted to prevent militant extremists getting to Russia.

The Russian prime minister also said he saw no need to scare anyone with a ground operation in Syria. It was not immediately clear to what he was referring.