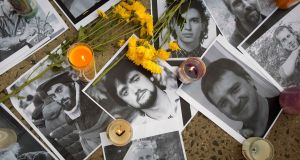 Photos of people reported to have died during clashes in Kiev at a makeshift memorial in the Little Ukraine section of the Manhattan borough of New York. Photograph: Carlo Allegri/Reuters

As rival neighbours east and west of the former Soviet republic said a power vacuum in Kiev must not lead to the country breaking apart, acting president Oleksander Turchinov said

Ukraine’s new leaders wanted relations with Russia on a “new, equal and good-neighbourly footing that recognises and takes into account Ukraine’s European choice”.

European Union foreign policy chief Catherine Ashton has arrived in Kiev, where she is expected to discuss measures to shore up the ailing economy, which the finance ministry said required $35 billion in foreign aid over the next two years, with the first tranche needed within two weeks.

Mr Yanukovich, who vanished on Saturday, is still at large.

“An official case for the mass murder of peaceful citizens has been opened,” acting interior minister Arsen Avakov wrote on his Facebook profile.

“Yanukovich and other people responsible for this have been declared wanted,” he said.

Mr Yanukovich had left a private residence in Balaclava, in the Russian-speaking Crimea region, for an unknown destination in a car with one of his aides, Mr Avakov said.

On Independence Square in central Kiev, cradle of the uprising, barricades of old furniture and car tyres remained in place, with smoke rising from camp fires among tents occupied by diehards vowing to stay until elections in May.

The mood among the few hundred on the square was a mixture of fatigue, sorrow for the 82 people killed last week, and a sense of victory after three months of protests.

A large video screen by the side of the stage was showing the faces of the dead, one after another, on a loop. “Now is not the time for celebrating. We are still at war. We will stay here as long as we have to,” said Grigoriy Kuznetsov (53), dressed in black combat fatigues.

Galina Kravchuk, a middle-aged woman from Kiev, was holding a carnation. “We are looking to Europe now. We have hope. We want to join Europe,” she said.

Russia yesterday recalled its ambassador in Ukraine for consultations on the “deteriorating situation” in Kiev.

An ally of the ousted leader’s rival, Yulia Tymoshenko, he aims to swear in a government by tomorrow that can run things until a presidential election on May 25th.

Russian prime minister Dmitry Medvedev said Moscow had grave doubts about the legitimacy of those now in power in Ukraine and their recognition by some states was an “aberration”.

“We do not understand what is going on there. There is a real threat to our interests and to the lives of our citizens,” Mr Medvedev was quoted as saying by Russian news agencies.

Russia cited a duty to protect the lives of its citizens in 2008 as one justification for military intervention in Georgia, another former Soviet republic, in support of Kremlin-backed separatists in South Ossetia.

With battle-hardened, pro-Western protesters in control of Kiev and determined to hold their leaders to account, lawmakers rushed through decisions to cement their power, display their rejection of rampant corruption and bring to account officials who ordered police to fire on Independence Square.

But whoever takes charge as interim prime minister faces a huge challenge to satisfy popular expectations and will find an economy in deep crisis.