Only 28,000 protesters take to streets in rolling campaign against low pay and poverty 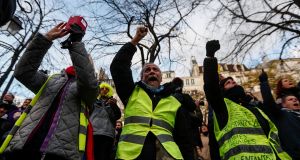 The gilets jaunes movement marked the first anniversary of their revolt with violent protests at the weekend.

The demonstrators, who are named after the high visibility yellow safety vests they made their symbol, mobilised only one-tenth the number who launched months of discontent on November 17th, 2018.

One year ago, 282,000 gilets jaunes took to the streets to protest a rise in fuel tax. The weekly marches broadened into a revolt over low salaries and declining standards of living.

Only 28,000 marched nationwide on Saturday, of whom 4,700 in Paris, said the interior ministry. Several hundred turned out again on Sunday.

More than 250 people were arrested, including 173 in Paris.

The worst clashes occurred on Saturday on the Place d’Italie, southern Paris, where about 3,000 protesters gathered.

Paris prefect of police Didier Lallement spoke of “scandalous destruction” and cancelled authorisation for a march across the city. “The images [on the Place d’Italie] are spectacular, but it’s normal life in the rest of the capital,” said Lallement.

More than 2,000 protesters have been injured in the past year. Dozens have lost an eye to rubber bullets.

It is unclear if the weekend protests were a last gasp of the movement or a foretaste of further unrest. Striking transport unions have called for a “convergence of struggles” on December 5th.

“Unfortunately, the gilets jaunes movement has been infected for months by the gangrene of ultras, of people who believe political violence is legitimate,” government spokeswoman Sibeth Ndiaye told Radio J. “In no event can we accept that.”

About 60 people gathered in the French alps to pay tribute to Chantal Mazet. The school teacher, age 63, died one year ago when a panicked motorist ran over her at a roadblock set up by protesters. “Homage to Chantal, Gilet Jaune, Victim of Neoliberalism,” declared their banner.