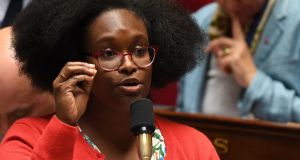 French government spokeswoman Sibeth Ndiaye speaks during a session of questions to the government at the French National Assembly in Paris. Photograph: Eric Feferberg/AFP via Getty Images

The men and women who surround French president Emmanuel Macron tend to be graduates of the elite grandes écoles, well-dressed but in drab colours, reserved to the point of tactiturnity.

Not Sibeth Ndiaye, the former head of communications at the Élysée who was promoted to government spokesperson, with cabinet member status, last April.

Ndiaye was born in Dakar, Senegal, 40 years ago. The far-right hate her outspokenness, that she is a naturalised African immigrant, and that she was once a Socialist militant.

“Am I the object of racism?” Ndiaye said in a group interview with the Anglo-American Press Association. “Yes, obviously.” She blamed social media for “amplifying and distorting the reality” of a mostly tolerant country.

Ndiaye says she has been fortunate to work for three men 'who didn’t really notice that I was a woman, or that I was black'

The far-right commentator Éric Zemmour remarked sarcastically on “the dazzling elegance of the outfits of our favourite cabinet minister, Sibeth Ndiaye, the height of French distinction”.

Ndiaye says she stopped being hurt by such remarks a long time ago. She dismissed Zemmour as “the embodiment of xenophobic thought”. Regarding Morano, she said republican values mean “one doesn’t say a Jew is rich because there’s underlying anti-Semitism. One doesn’t say an Arab is a thief, or that a black is lazy and wears circus outfits.”

Ndiaye says she has been fortunate to work for three men “who didn’t really notice that I was a woman, or that I was black”. The first two were Claude Bartolone, the then Socialist president of the Seine-Saint-Denis department, and Arnaud Montebourg, who preceded Macron as economy minister.

“Macron was the same” until a visit to the aeronautic show at Le Bourget during his time as minister. “Guards and policemen aren’t used to a minister having a black person with them, and they kept saying, ‘No madame, this is for the minister’s delegation.’ I finally cracked. I was weeping with rage,” she recounts. “That is the day that Macron noticed I was black . . . For a long time afterwards, he would turn around regularly to make sure I was there, that I’d got through the barriers.”

Ndiaye became a naturalised citizen in 2016, but her family “always had part of French history in us. We always thought we were a little bit French.” Her paternal grandfather died fighting as a tirailleur sénégalais in the French army in the second World War. Her father, Fara, and mother, Mireille, met as militant communist students campaigning in Paris for African independence.

Fara was a non-practising Muslim who became a deputy in the Senegalese assembly. Mireille was Catholic, half-German and half-Togolese. She became a magistrate and member of Senegal’s constitutional council.

The gilets jaunes crisis taught Macron that 'he cannot simply reform for the French and in their name, but he must reform with the French'

Ndiaye met her own husband, Patrice Roques, the son of teachers from southern France, when both were student activists in the Socialist Party. He works in public housing, and tabloids describe them as a “fusional couple”. They have twin daughters, Youmali and Nguissally, aged nine, and a son, Djimane, aged six.

Ndiaye describes Macron as “committed, stubborn, a man who confronts obstacles with great determination. If I’ve learned anything from him, it is that politics must change people’s lives, for real; that it’s not just words.”

Ndiaye’s relations with the press were poor at the Élysée. The president and prime minister reportedly asked her to be more diplomatic in her new position, which coincided with the kinder, gentler phase of Macron’s presidency, ushered in by last winter’s gilets jaunes crisis.

Ndiaye’s former defensive, and sometimes aggressive, persona has vanished. She spoke at length of tremors of French discontent, which will converge in a nationwide transport strike on December 5th.

The gilets jaunes crisis taught Macron that “he cannot simply reform for the French and in their name, but he must reform with the French”, Ndiaye said. “He wants the second half of his term to be focused on proximity with our compatriots, in the way he organises public policy, and in his relations with them.” Macron “stole” his idea for a national debate from the Citizens’ Assemblies that were established to address difficult political questions in Ireland, she said.

Ndiaye, like Macron, is now careful to acknowledge that large segments of French society are suffering. Hospital personnel were on strike on the day we met. Previous governments had foolishly believed they could reduce demand for medical care by reducing budgets and the number of doctors, Ndiaye said. “People cannot take it anymore. Working conditions are sub-normal.” Before the day was over, Macron said he had heard the anger of hospital workers, and promised a new plan for them, to be announced on November 20th.

Ndiaye said that “agri-bashing” had given French farmers the feeling that “they are blamed for all the ills of society”, including tainted food, the use of pesticides and pollution.

The December 5th strike is to protest against Macron’s still ill-defined pension reform. “There is general disquiet, because 66 million of our compatriots will be affected by it,” Ndiaye said. French governments have enacted pension reform on average every five years for the past 20 years. Macron is attempting what no other president has, to meld 42 different regimes into one clear, fair, universal system. Those who enjoy more favourable pension regimes are anguished.

“It is legitimate for there to be worries,” Ndiaye said. “Our objective is not to avoid the demonstration, because I fear it will take place anyway, but to advance, to show that we are holding a hand out to everyone, that all options are on the table.”

While Macron tries to maintain calm at home, he is deliberately disruptive in international relations. Referring to a recent interview in which he spoke of the “brain death of Nato”, Ndiaye said: “One of Emmanuel Macron’s hallmarks is to always say things. Diplomacy is usually conducted with muted words. But if you don’t say things, problems don’t get solved.”

World trade and the process of accession to the EU are two other areas where Macron is trying to shake things up, Ndiaye said.