US boosts Balkan role and calls for historic Serbia-Kosovo pact

‘Both sides should lose’ something in the recognition deal, says Serbian president 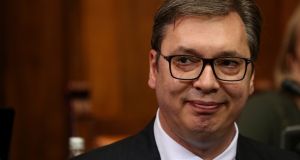 US officials and congressmen have urged Serbia and Kosovo to finally thrash out a historic deal to establish normal relations, as Washington boosts its role in the Balkans amid competition from the European Union, Russia, China and Turkey.

The state department appointed experienced Balkan hand Matthew Palmer as US special representative to the region last week, and in recent days congressmen have visited Serbia, Kosovo and Montenegro for talks with their leaders.

“America is here to be your friend and both nations [Serbia and Kosovo] will have support in reaching an agreement,” Republican senator Ron Johnson said in Belgrade on Friday after talks with Serbian president Aleksandar Vucic.

“We are here to convey the clear message that both Republicans and Democrats in Congress are with Serbia and want a stronger partnership,” added senator Chris Murphy.

The Democrat said he hoped that after Kosovo’s early elections on October 6th “they will take steps that we all know are necessary in order to get negotiations and talks back on track”.

EU-brokered talks to normalise relations between Serbia and its former province, which declared independence in 2008, broke down last November when Pristina imposed 100 per cent tariffs on Serbian imports in retaliation for Belgrade lobbying to keep Kosovo out of international organisations.

The US and EU have asked Pristina to lift the taxes and urged Serbia to stop trying to persuade countries to revoke their recognition of Kosovo’s sovereignty.

Mr Murphy said “deep sacrifice” was needed from both sides to clinch a deal to help heal the wounds of a 1998-9 war between Serbian forces and rebels in mostly ethnic Albanian Kosovo, and open the path to their eventual EU membership.

Mr Vucic and Kosovo counterpart Hashim Thaci have previously indicated a willingness to discuss border changes as part of a deal, and US and EU officials have said they would accept any agreement that is acceptable to Pristina and Belgrade.

The prospect of a “land swap” alarms many people in the region and some European capitals, however, given the Balkans’ recent history of war and continuing tension between ethnic groups in Kosovo, Bosnia and elsewhere.

“We have heard that the US was not sufficiently engaged, so we are now competing for positive influence and using it for the goal of integrating the western Balkans into Euro-Atlantic institutions, that is the strategic interest of the EU,” Mr Palmer said this week.

While all Balkan states aim to join the EU and most have joined or aspire to Nato membership, Russia, China and Turkey also enjoy influence in the region.

“It is very important that we defeat the forces that are working against us and trying to undermine Montenegro. For the future of the region as a whole,” US senator Lindsey Graham said this week in Montenegro, where the pro-EU government accuses Russian agents of being behind a failed coup attempt in 2016.