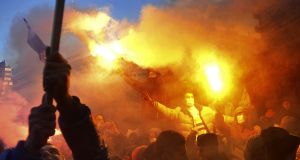 When Serbian ultranationalist Vojislav Seselj was controversially cleared of war crimes last month, cheers were heard far to the east of Belgrade.

“I congratulate my friend on victory!” Russia’s deputy prime minister Dmitry Rogozin tweeted soon after the UN court in The Hague acquitted Seselj.

“But who will restore his health, ruined by prison and public humiliation?” asked Rogozin of a man who spent almost 12 years in jail in the Netherlands before being allowed home on health grounds in 2014 to await the court’s decision.

A verdict that outraged many in the Balkans and which faces an appeal by the prosecution freed Seselj to contest parliamentary elections this Sunday, in which Serbia’s resurgent nationalism and the country’s old ally Russia are to the fore.

Polls suggest the Radicals and Dveri together will take more than 10 per cent of votes, far behind the ruling Progressive Party of prime minister Aleksandar Vucic, but indicative of a rightward shift in Serbia that is mirrored across the region.

“We’ve seen nothing good from trying to join the EU, the economy is just getting worse,” said Veselin, a retired engineer in Belgrade. “I don’t think Europe really wants us, they have enough trouble now with refugees,” he added.

“I’ll probably vote for Seselj. We need a strong character to stand up to Vucic and his clan, and he would bring help from Russia. Russia is strong now, and if Europe keeps having problems it would be good to be friendly with the Russians.”

A struggling, state-dominated economy, unemployment of almost 20 per cent and average monthly wage of around €350 leave many in Serbia disillusioned with the tough reforms demanded by the EU and IMF.

This fuels a widespread sense of Serb victimhood that Seselj taps with his denunciations of the West, which he accuses of demonising Serbia over the 1990s Balkan wars and of seeking to poison its ties with Slavic, Orthodox “brother” Russia.

“The West doesn’t trust Serbia and never will. To them, Serbia is a little Russia in the Balkans. That’s why they want to destroy us,” Seselj told Russia’s state-run RT channel after his acquittal.

“We want to move Serbia away from the EU and towards integration with Russia. We want Serbia to be a democratic state; we want to protect our domestic market and modernise our industry, relying only on ourselves . . . Our industry has been pretty much destroyed. Serbia lives in poverty.”

Vucic has sought to strike a delicate balance between east and west. His government finally secured the start of EU accession talks last December, and, while insisting it will not seek Nato membership, it did sign a deal with the military alliance this year to allow more technical and logistical co-operation.

Serbia is also treading a fine economic line, doing almost two-thirds of its foreign trade with EU states, while refusing to join western sanctions against Russia over its aggression in Ukraine.

Few things are clear-cut in Serbian politics: Vucic signed a landmark EU-brokered deal to improve relations with independent Kosovo in 2015, while insisting that Belgrade would never recognise the sovereignty of the co-signatory.

Vucic (46) is himself a political shape-shifter, becoming a pro-EU conservative only after serving as a minister to warmongering 1990s Yugoslav leader Slobodan Milosevic and serving as Radical Party ally and legal adviser to Seselj until 2008.

Vucic has admitted making mistakes earlier in his political life and called the 1995 Srebrenica massacre by Bosnian Serbs a “monstrous crime”, while also denying that it was genocide and accusing the UN court of persecuting his nation.

“Vucic will win on Sunday. His people control big business and the media,” said Ognjen, a Belgrade publisher, who plans to vote for a small pro-business and anti-corruption party called Enough is Enough.

Across the square in central Belgrade, people filed into a Dveri party event past a man selling Putin badges.

“Nothing will improve after the election, we’re still a long way from the EU,” Ognjen said.

“And as for switching to an alliance with Russia – no one serious could really suggest that.”