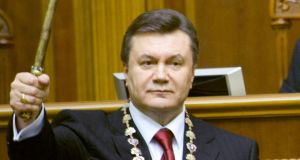 Viktor Yanukovich was an infrequent visitor to his hometown during a four-year presidency that ended in February, when he fled to Russia after months of rallies culminated in scores of protesters being shot dead in Kiev, allegedly upon his orders. Photograph: Anastasiya Sirotkina/Reuters

In Yenakievo, eastern Ukraine, preparations for Easter were gaining pace. At the Orthodox Church of the Holy Virgin, ladies swept the yard outside and dusted off the icons, under the quiet gaze of Father Andrei, a local man who has been priest here for a decade.

Was he expecting Yenakievo’s most famous son to come home for Easter Sunday?

Father Andrei’s eyes widened, his lips locked tight and his face flushed at the very question; words failed him but the grave shaking of his head was categorical.

Viktor Yanukovich was an infrequent visitor to his hometown during a four-year presidency that ended in February, when he fled to Russia after months of rallies culminated in scores of protesters being shot dead in Kiev, allegedly upon his orders.

Perhaps he didn’t like to recall his ragged and violent early years in soot-streaked Yenakievo, which last Saturday was covered by gritty, eye-stinging smoke from a massive metal plant that is only a short walk from the town centre.

Born here in 1950 to a metalworker and a nurse, Yanukovich was jailed for robbery when he was 17 and for assault three years later.


Ex-convict protégé
The convictions were wiped from the record in 1978 on the urging of Georgi Beregovoi, a former cosmonaut and deputy of the USSR’s Supreme Soviet who, for reasons still unclear, made the young ex-convict his protégé.

Yanukovich prospered under the wing of Beregovoi, an influential figure in Donetsk province, and moved swiftly through the ranks of local business and politics. In 1997, Ukrainian president Leonid Kuchma appointed him governor of the region, and in 2002 named him prime minister.

Many credit Yanukovich’s rise to his relationship with Rinat Akhmetov, a Donetsk miner’s son who is now Ukraine’s richest oligarch and financier of the Regions Party that ruled under Yanukovich.

The party has crumbled since Ukraine’s revolution, but its diehard deputies still claim to defend the interests of Russophone eastern areas, and are the main political voices calling for sweeping powers to be devolved from Kiev to the regions.

Some are accused of fomenting unrest in the east and inciting separatism, and pro-government figures allege that many of Yanukovich’s old allies would rather split the country than lose wealth and influence and face possible corruption charges.

Akhmetov seems to be hedging his bets, calling for a peaceful end to Ukraine’s crisis but giving no clear support to the pro-EU government nor condemning Moscow’s annexation of Crimea or role in destabilising the east.

At the ageing Yenakievo metal plant that Akhmetov’s company controls, workers ending their Saturday afternoon shift were heading home for Easter. Some were going to rebel-held Slovyansk, where the next day the local morgue would receive the bodies of three men shot dead at a nearby checkpoint. The killers are not known, but Russia and the rebels blamed Ukrainian nationalists, adding fuel to widespread fear in the east of what the new order will bring.

“In Slovyansk, people are defending their town. Sure, they’ve taken over some buildings, but didn’t the protesters in Kiev seize buildings?” said welder Alexei.

“We want to live peacefully, and with good relations with Russia,” added his colleague, Alexander. “What good to us is conflict with Russia, when all our contracts and orders come from there? I hope they will help us if we need it – we are brothers.”

The men felt only scorn for Yanukovich, however. “He betrayed us. He ran off,” said Alexei as he walked away, before turning and hurrying back: “Please write that we don’t want war,” he said. “But if they come and attack us, send tanks against us, what can we do?”


Russian troops
Kiev insists its current military-led “anti-terrorist” operation is intended to protect people from gunmen occupying buildings and manning checkpoints, and Russian troops and agents who allegedly support and organise them. But there is great mistrust of the new government across the east.

People here are used to being governed by “their” politicians – Yanukovich and his cronies – and are deeply wary of new leaders from central and western Ukraine who reject Russia in favour of a European Union that is alien to most easterners.

On Yenakievo’s main square, a group of miners cursed Yanukovich for fleeing and for doing little to improve his pollution-blighted hometown. But while they all supported the rebel occupation of official buildings as a show of eastern defiance to Kiev, they disagreed on what should happen next, and why.

“We should join Russia. The pay and pensions are better, and it’s a stable country,” said Vadim.

“What does Russia want with us?” asked Sergei. “We can stay in Ukraine but we need to run our own affairs. We have all the mines, the factories, the metal. Kiev will regret it if they ignore us.”