Ukraine on edge as mass protests converge on capital 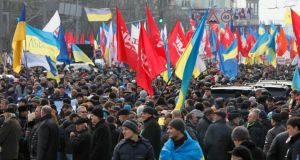 People in support of the EU integration hold a rally in Kiev today. Ukrainian president Viktor Yanukovich said in a statement today that he will speed up the process of moving Ukraine closer to the European Union. Photograph: Gleb Garanich/Reuters

Ukrainian opposition leaders called today for president Viktor Yanukovich and his government to resign at a rally of about 350,000 people, the biggest protest in the capital Kiev since the “Orange Revolution” of nine years ago.

On a day of huge emotion, which also marked the anniversary of Ukraine’s 1991 referendum on independence from the Soviet Union, opposition leaders denounced Mr Yanukovich for walking away from a pact offered by the European Union and swinging trade policy back towards Russia.

After months of pressure from Russia, Mr Yanukovich suddenly backpedalled last week from signing the deal on closer relations with the EU in favour of renewed economic dialogue with Moscow, Ukraine’s former Soviet master.

All three opposition leaders also occupied a trade union building, turning it into a temporary headquarters. The events, evoking memories of the 2004-5 Orange Revolution that overturned the established political order, took place against the background of an apparent attempt by a protesters to storm the main presidential office.

Interior ministry forces and riot police fired tear gas and stun grenades to repel the protesters, who used an earth excavator in an attempt to break through police lines. Police said 100 officers had been injured in violence during the day, news agencies reported.

But opposition politicians, who had been urging protesters all day to remain peaceful, denounced the violence at the headquarters of Yanukovich’s administration as a stage-managed “provocation” to justify a security clampdown. They sent officials to appeal to supporters to return to the main protest on Independence Square. “We know that the president wants to ... declare a state of emergency in the country,” Mr Yatsenyuk told reporters. Klitschko, who heads a separate pro-Europe party, also urged his supporters to stay away from the area near the presidential offices.

“The authorities are trying to turn our peaceful demonstration into a place of blood,” he said. Police said some protesters had been detained and 22 had sought medical help, the Russian state-owned agency RIA reported.

Mr Yanukovich’s U-turn has highlighted an old East-West tug-of-war over Ukraine, which is the cradle of eastern Slavic tradition while sharing today borders with four EU countries. Yanukovich, a native Russian-speaker, represents a constituency in the industrial east which has close cultural and linguistic kinship with Russia.

In Ukrainian-speaking areas, particularly in the west, people have a more Western outlook. Mr Yanukovich says he has taken only a strategic pause in moves closer to Europe but the opposition accuses him of doing a deal with Russia that will ultimately harm national sovereignty. Trying to defuse tensions before today’s rally, Mr Yanukovich said he would do everything in his power to speed up moves toward the EU.

But he repeated the need to balance European integration with national interests. The protesters, shouting “Down with the Gang!”, swept through the streets of Kiev in a sea of blue and gold - the colours of both the EU and Ukrainian flags - before arriving at Independence Square. The crowd had been additionally inflamed by a crackdown early yesterday when riot police broke up an encampment of mainly young protesters using batons and stun grenades, injuring an undisclosed number of people. Police, who had sealed off part of Independence Square following the swoop on young protesters on Saturday, withdrew as the marchers approached the square.

Apart from Mr Klitschko’s call for Mr Yanukovich to go, far-right nationalist Tyahniboh called for a national strike. “From this day, we are starting a strike,” he declared. “I want my children to live in a country where they don’t beat young people,” said protester Andrey (33) the manager of a large company, who declined to give his surname for fear of reprisals. “I want my children to live in a state that differs from the Soviet past,” said Iryna Lukyanenko, a 19-year-old student. “After Saturday, when the protest was broken up, I thought I should come today to defend our rights, We are no longer talking about ‘euro-integration’, but our rights.” “We are here to defend our dignity,” said Andrey Semenov (55) who runs a small business. His friend Mykhailo (58) said: “We are here to defend the young people, our children who are defending the future.”

The interior minister warned that police would respond to any disorder and said Ukraine had no place among the ranks of countries like Libya or Tunisia, where Arab popular uprisings overthrew autocratic old-guard leaderships. “If there are any calls to disorder, we will respond,” Interfax quoted the minister, Vitaly Zakharchenko, as saying.

Prime minister Mykola Azarov said late yesterday that Mr Yanukovich would travel to Moscow to work on a “road map” for new economic co-operation after a trip to China later this month, though he gave no dates. Reuters