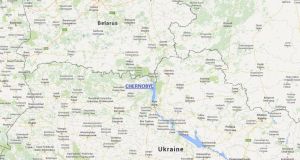 A 30km exclusion zone remains in place around the plant in Chernobyl, Ukraine, which is near the border with Belarus.

Earlier, the interior ministry had warned that high winds were blowing the fire in northern Ukraine towards Chernobyl, where in 1986 a reactor fire led to the world’s worst nuclear disaster.

A 30km (18.6 miles) exclusion zone remains in place around the plant, which remains contaminated by radioactive particles.

“The situation is being controlled, but this is the biggest fire since 1992. We’ve not had this scale of fire,” Ukraine’s Interfax news agency reported Mr Yatseniuk as telling journalists.

“It is around 20 kilometres (from the fire) to the plant. Our emergency services are actively working there to prevent the fire spreading further,” he said.

In February, international experts warned that a large amount of dangerous isotopes remained in the forests near Chernobyl, which could be spread by forest fires.

“Wildfires . . . pose a high risk of redistributing radioactivity,” according to a paper published in Ecological Monographs, titled: Fire evolution in the radioactive forests of Ukraine and Belarus: future risks for the population and the environment.

Chernobyl’s Reactor 4, the epicentre of the 1986 blast, is covered with a concrete casement that the Ukrainian authorities plan to replace by 2016.