Under 1951 Refugee Convention countries are obliged to accept refugees - Sutherland

A makeshift migrant camp in Calais, known as "The Jungle", is the home to some 3,000 men, women and young children hoping to one day cross the Channel and reach Britain in search of a better life. Video: Reuters 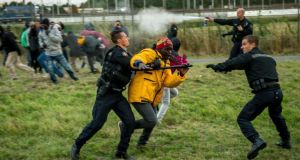 French gendarmes try to stop migrants on the Eurotunnel site in Coquelles near Calais, northern France, on Wednesday. Photograph: AFP 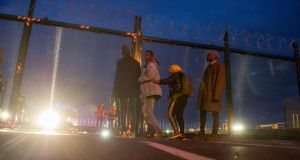 Migrants stand in front of a fence on the Eurotunnel site near the boarding docks in Coquelles near Calais, northern France, on Wednesday. Photograph: AFP

The United Nations special representative for migration Peter Sutherland has accused the British media of exaggerating “beyond belief” accounts of migrants and asylum seekers flooding into the United Kingdom.

Mr Sutherland said media reports that “thousands of migrants” were attempting to travel to Britain from Calais through the Channel Tunnel had been “calculated to inflame tensions”.

“The total figure that we’re talking about is at most between five and 10,000 people who are living in dreadful conditions,” Mr Sutherland told RTÉ’s Morning Ireland programme.

“The number of cases approved in a number of countries is a massive multiple of the 10,000 that are the threat, allegedly. This is an exaggerated response and we should have a much more holistic European policy that actually works.”

Distinguishing between a refugee and a migrant is absolutely fundamental, said Mr Sutherland, explaining that a refugee is a person escaping persecution.

“Under a 1951 convention legally we are all obliged to keep a refugee and not to send a refugee back to the country where he or she was being persecuted. So there’s a huge difference between the two.

“What the [European]commission has suggested is it should be a fair allocation across European countries and everybody should carry their bit of responsibility.”

Migrants are defined by the UN Refugee Agency (UNHCR) as people who chose to move in order to improve their lives.

Mr Sutherland commended crew members of the Irish navy who had saved lives in the Mediterranean and described Ireland’s response to the migrant crisis so far as “not bad”.

However, he highlighted that the people rescued in the Mediterranean were subsequently “dumped in Italy” which, he said, isn’t a fair allocation across the European Union.

“You can’t just say ‘you’re on the Mediterranean, you have to carry the burden’. “ He said it was not an issue just for Italy, Greece, Malta, Spain, “it has to be everybody’s responsibility”.

He said it was important for Ireland to “go further and do more”.

“Ireland has the, I won’t say unique, but rather positive position that we don’t have a racist, anti-immigrant party in Europe. We don’t have a political movement of the toxic kind that you find is so many other countries and I think we can be proud of that and that we should take more refugees rather than less.”

The Naval Service patrol ship LÉ Niamh discovered the bodies of 14 migrants below deck on an overcrowded trafficking barge in the Mediterranean earlier this week while rescuing 453 people from the vessel.

The 14 migrants are believed to have died of crushing and asphyxiation after they were herded with more than 500 others on board a wooden barge that left Libya in the early hours of Monday.

More than 2,000 refugees and migrants are estimated to have died or gone missing while trying to cross the Mediterranean so far this year, according to the UNHCR.