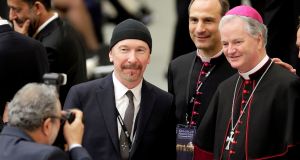 U2 guitarist The Edge, whose real name is David Evans, poses with Irish bishop Paul Tighe before listening to US vice-president Joe Biden speak at the Vatican. Photograph: Max Rossi/Reuters

U2 guitarist The Edge has become the first rock star to play in the Sistine Chapel, a venue he described as “the most beautiful parish hall in the world”.

The performer, whose real name is David Evans, sang four songs on Saturday night for about 200 doctors, researchers and philanthropists who attended a conference at the Vatican on regenerative medicine called Cellular Horizons.

Backed by a choir of seven Irish teenagers, and wearing his trademark black beanie cap, he played acoustic guitar and sang a cover of Leonard Cohen’s If it be your will, and versions of U2 songs Yahweh, Ordinary love and Walk on.

The Edge, whose father died last month from cancer and whose daughter overcame leukaemia, is on the board of foundations working for cancer prevention.

He joked with his audience, telling them he was stunned when asked to play in the chapel which was painted by Renaissance master Michelangelo in the 16th century.

“When they asked me if I wanted to become the first contemporary artist to play in the Sistine Chapel, I didn’t know what to say because usually there’s this other guy who sings,” the musician said, referring to Bono.

“Being Irish you learn very early that if you want to be asked to come back it’s very important to thank the local parish priest for the loan of the hall,” he said.

He then thanked Pope Francis and other Vatican officials “for allowing us to use the most beautiful parish hall in the world”.

“He’s doing an amazing job and long may he continue,” he added.

The guitarist sprinkled his address with technical terms such as bio markers and angiogenesis.

“I can tell this is a really cool audience because normally when I say angiogenesis eyes glaze over,” he said. Angiogenesis is the process through which new blood vessels, which tumours need to grow, are formed. Scientists are seeking ways to block tumour angiogenesis.

The Vatican conference, which was addressed by US vice-president Joe Biden on Friday, was organised by the US-based Stem for Life Foundation to share ideas and treatments on the use of adult stem cells to cure rare diseases.

1 Coronavirus: Pubs to stay closed until August 10th and face masks to be worn in shops
2 Like ‘a grandfather at the sherry cabinet’: Trump’s meandering monologue
3 Fianna Fáil ‘bigger’ than Micheál Martin, Cowen tells party activist
4 After only three weeks, Micheál Martin has created powerful enemies who will come back to haunt him
5 Coronavirus: Two more deaths brings total toll in State to 1,748
Real news has value SUBSCRIBE