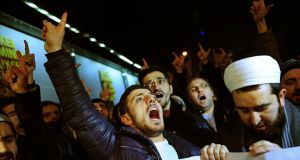 Muslim protesters shout slogans during a protest in Istanbul against the publication by Turkish daily newspaper Cumhuriyet of a a four-page pull-out containing cartoons and articles translated into Turkish from the historic Charlie Hebdo issue. Photograph: Ozan Koseozan/AFP/Getty Images

A Turkish court has banned the online publication of Charlie Hebdo’s cartoon of the Prophet Muhammad hours after it was printed by a prominent secularist newspaper in the Muslim majority nation.

Yesterday’s ruling by the court in the southeastern city of Diyarbakir comes as concern for the freedom of the press and tension between self-styled secularists and supporters of President Recep Tayyip Erdogan are rising.

Earlier in the day Cumhuriyet had republished both the cartoon of the Prophet, which has been attacked by clerics such as Egypt’s Grand Mufti as a “provocation”, and a separate four-page pull-out of translated extracts from Charlie Hebdo.

Utku Cakirozer, Cumhuriyet’s editor, said the decision to publish was a gesture of solidarity after last week’s murderous assault on the French magazine’s offices, which he labelled an “attack against the freedom of expression”.

“Cumhuriyet, which has lost its own writers to terrorist attacks, understands the pain of the Charlie Hebdo massacre very well,” he tweeted.

Cakirozer was referring to the unexplained 1993 car bomb that killed Ugur Mumcu, one of the paper’s best-known investigative reporters, as well as the murders of at least six other Cumhuriyet writers, mainly in the 1990s. In some instances, Islamist radicals were suspected of the killings.

Turks took to social media in response to the ruling, with tens of thousands tweeting “Jesuiscumhuriyet” in support of the newspaper, while others responded with rival hashtags, threats and insults.

Yalcin Akdogan, a deputy prime minister, tweeted: “Those who disregard Muslims’ sacred values by publishing forms allegedly referring to our Prophet are clearly committing a provocation.”

Cumhuriyet has been a well-known secularist periodical since its founding in 1924, in the early years of the republic established by Mustafa Kemal Ataturk. But its circulation is in decline.

It is fiercely opposed to Mr Erdogan, who has announced the goal of raising a more pious generation. The president has been widely criticised for his stance on the media. The editor of Zaman, the best-selling newspaper, was briefly detained last month on terrorism charges, while new laws give authorities more powers to block internet sites.

“It’s not secularism that is under threat in Turkey; it’s freedom of expression, the rule of law and tolerance. That’s the real problem,” said Ozgur Unluhisarcikli of the German Marshall Fund of the US, a think-tank. “If the roles were reversed and the cartoons were thought to insult Ataturk, we might still be having the same argument.”

According to the Cumhuriyet website, distribution of yesterday’s edition was allowed only after police, in consultation with a prosecutor, inspected it for 40 minutes. Police later stationed riot vehicles outside the newspaper’s offices.