Erdogan tells union: ‘If you go any further, these border gates will be opened’ 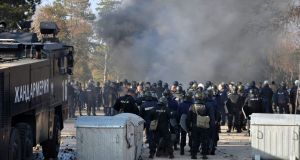 Bulgarian riot police stand by during clashes in the migrant reception centre in the town of Harmanli on Thursday. Photograph: Stringer/AFP/Getty Images

Bulgaria has arrested hundreds of migrants after a riot at a reception centre near the Turkish border, amid renewed threats from Ankara to allow asylum seekers easy passage to the EU unless the bloc quickly implements a key refugee deal.

“Around 300 migrants . . . have been arrested,” Bulgarian prime minister Boiko Borisov said on Friday morning after visiting the Harmanli camp about 40km from the Turkish frontier.

Most of the alleged rioters were from Afghanistan, and Mr Borisov said a handful who were considered to be a national security threat would be deported to Kabul as soon as possible.

“The others who disturbed the peace will be among the first to be extradited but, until then, they will be placed in closed-type camps. A plane for Afghanistan has already been arranged and it will fly in December,” Bulgaria’s Novinite news agency quoted him as saying.

Officials said about 27 people were injured when some 1,500 migrants rioted on Thursday, burning tyres and furniture and hurling rocks at police, who responded with rubber bullets and water cannon.

The migrants were aggrieved at being confined to the camp due to claims from local people and ultra-nationalist groups that an infectious disease had broken out there.

State inspectors said the camp and its residents posed no health risk, but the disease claim and subsequent violence will only add to widespread hostility towards the migrants in Bulgaria.

About 13,000 migrants have become trapped in Bulgaria since Balkan states closed their borders to them in March.

They continue to reach Bulgaria by trekking from Turkey and finding a way through or around a fence on the frontier. From Bulgaria they try to move northwest to Serbia – a route on which one Afghan froze to death this week.

The EU’s effort in March to halt the flow of migrants hinged on a deal with Turkey, according to which Ankara would tighten border security in return for €6 billion in EU aid, visa-free travel to the bloc for Turks and other benefits.

Turkey has slashed the number of migrants reaching the EU, but Brussels has delayed fulfilment of its pledges amid criticism of Turkish president Recep Tayyip Erdogan for his fierce crackdown on opponents following a failed July coup.

On Friday, Mr Erdogan raged against the European Parliament for passing a non-binding resolution calling on the EU to freeze membership talks with Turkey.

“If you go any further, these border gates will be opened,” he said, accusing the EU of sending a fraction of the money promised to Turkey, which he claimed had spent $15 billion (€14.17 billion) looking after some three million refugees on its territory.

“It is important that we do not freeze the accession negotiations because that would only further damage the relationship between Turkey and Europe, and that would not be in the interest” of either party, said German foreign ministry spokeswoman Sawsan Chebli.