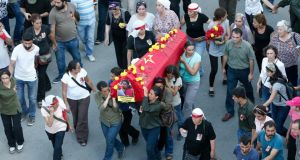 Mourners carry the coffin of Günay Özarslann, who was killed by Turkish police in Istanbul in an anti-terror operation on July 24th. ‘Günay ... wasn’t married – she was in love with her revolutionary aspirations,” says her elder sister. Photograph: Sedat Suna/EPA

For Günay Özarslan, July 24th began like any other searing Istanbul summer morning. She had been staying with friends in the city’s Bagcilar district – her activism saw her regularly move around and it was rare for her to be found at her family’s home.

The 32-year-old had black, curly hair and wore thin glasses. “Günay didn’t like to talk too much about herself. She wasn’t married – she was in love with her revolutionary aspirations,” says her elder sister.

Across Turkey scores of police Swat teams and intelligence officers were readying to swoop on suspected terrorists following the killing of 32 activists in Suruc four days previous by an Islamic State-linked youth. In the space of a few hours, more than 1,000 were detained across Turkey in an operation which involved over 5,000 police. Günay Özarslan was one of the targets.

At dawn, armed police shot through a window of her friends’ home. A pool of blood next to the window marked the spot where she was felled. Her family and lawyers say her body had 15 bullet wounds. Authorities say she had been planning a suicide attack.

Over the past decade, Turkey’s coup-prone military had been reeled in, the economy transformed and an uneasy peace had been carved out with far-left elements and Kurdish militants.

But the war in Syria and losses at parliamentary elections in June have put the governing AK Party on the war path on three fronts: against Islamic State jihadists, the Kurdistan Worker’s Party or PKK, and radical leftists. Since late July, more than 1,000 militants, mostly in northern Iraq, are thought to have been killed in Turkish government air strikes.

“I came to work and was going through the newspaper websites when I saw that there had been a [security] operation. I saw that someone with the initials ‘GO’ had been killed, but I didn’t suspect it was Günay,” says her sister, who has asked that her name not be used for fear of losing her job.

Within a couple of hours a lawyer called to ask her to come identify Günay’s body. “We had no idea that she was in danger, but Günay would never tell.”

Özarslan was a member of the far-left Revolutionary People’s Liberation Party/Front (DHKP/C), which claimed responsibility for the US consulate attack. The group, designated as a terrorist organisation by the Turkish government, the European Union and the United States, has been responsible for the assassinations of dozens of business leaders, politicians and police officials since the 1970s.

Her death sparked violent protests and the shooting dead of a police officer in Gazi, a working-class district in west Istanbul. For three days following her death, a standoff ensued when police refused to allow her body be taken from a cemavi, or Alevi house of worship, for burial.

Though few Turks see a return to the 1980s level of political violence and state repression as likely because of the democratic and socio-economic gains made since then, the ongoing waves of detentions and air strikes on PKK targets in the southeast threaten to spiral beyond the control of any one side.

Analyst Cale Salih of the European Council on Foreign Relations, a think tank, believes that even if Turkey’s escalation against the PKK is a ploy to win votes at an expected snap election in the coming months, the unrest and killings may go so far as to make it difficult for either side to back down “to a point where they can start having serious negotiations again”.

“Turkey has tried to defeat the PKK for decades with these exact military tactics, and yet the PKK still stands strong,” she says.

For Günay Özarslan’s sister, who has a brother imprisoned for similar involvement with the DHKP/C, the return to violence in Turkey is a result of the “ego” of one person – Turkey’s president Recep Tayyip Erdogan.

“If you think about it logically, I have the feeling they [the AK Party] are trying to kill everybody who doesn’t fit into their picture Günay’s death makes me believe they’re trying to polarise Turkey.”