Ancient relics of Christian past are slowly being lost to history 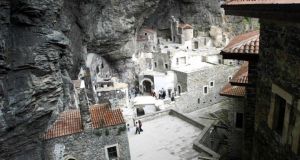 The Sumela Monastery, which has seen many of its symbols of Christianity – crosses carved into mountain stone and frescoes – destroyed. Photograph: Mustafa Ozer/AFP/Getty Images

The light of day was quickly fading as a farmer gestured to follow him through a doorway into the stone outhouse. Inside, in the darkness, there are sacks of animal food and dust-covered machinery.

In the light from a camera’s flash hints of eastern Turkey’s Christian past tentatively show themselves: a cross chiselled into an arch on an ancient wall; an apse painted with the faint, pale, blue colour associated with the Virgin Mary during Byzantine times.

Here in the Pontic mountains, named after the community of Greeks stationed on the Black Sea coast from 700BC until their massacre and expulsion in the early 20th century, ancient relics of a Christian past are slowly and in some cases deliberately being lost to history.

In some cases, Turkey’s ruling AK Party, a moderate Islamist movement popular with millions of conservative Turks, has been charged with turning a blind eye to the destruction of Christian sites.

The church-turned-cattle shed is close to what remains of Varzahan monastery, 9km north of the provincial capital Bayburt, and reportedly the scene of massacres of Armenians by Turks in the 1700s. Scenes and stories such as these are not uncommon in an area once home to countless Christian communities.

About two million Armenian and Greek Christians were killed or deported from eastern Turkey during and after the first World War. A 1923 convention ratifying the exchange of about 1.5 million Greek Christians living in Turkey and a half million Muslims in Greece precipitated the loss of Christian culture.

A 160km drive north in the Black Sea city of Trabzon, Hagia Sofia, a church for much of the last 800 years and a museum from 1964 until last year, today has its splendid, centuries-old Christian frescos concealed. It is now a mosque.

The local tourist board is catering to an audience with little interest in its history. Two coach-loads of Arab athletes arrive to pray.

Outside, construction is under way to build trinket shops, according to a security guard. At the entrance, adverts for hajj to Mecca and donations for Gaza are pinned against the door among other Arabic-language literature.

In Hagia Sofia’s prayers section all iconography has been covered by roll-up blinds and screens with a small section of Christian frescos visible only in the tourist bay. Fresco faces have been destroyed wholesale and four plaques with the names of the prophet Mohammad’s closest confidants have been freshly attached to the church’s ancient pillars.

In 2012 Turkey’s General Directorate of Pious Foundations – an institution headed by Turkey’s deputy prime minister – filed a lawsuit against the ministry of culture to return the museum to its 15th-century mosque status, which it was for several decades during the 20th century, even though a local judge has since found the conversion to be illegal.

It’s not just buildings that are under threat. In some cases, Christians have been too. In 2006 an Italian Catholic priest was murdered by a 16-year-old as he knelt in prayer inside the Santa Maria church in Trabzon. The boy reportedly shouted “Allahu Akbar” (God is greatest) before pulling the trigger. Today the church is said to have a congregation of one.

A year later workers at a bible publishing company had their throats slit in the eastern Turkish city of Malatya.

In Istanbul’s Karakoy district, a €525 million port development is under construction next to a group of six churches of varying denominations. Some fear the churches may be levelled.

“You can’t say there’s a problem about targeting Christians in eastern Turkey,” said Rober Koptas, the editor-in-chief of Armenian newspaper Agos, “because they don’t exist [in eastern Turkey] any more. The main reason was the genocide [of 1915].”

Some Christians were upset the Armenian Patriarchate was unable to send a representative to say Mass at the Easter Sunday reopening of one of the Middle East’s largest churches in south Turkey last year.

The Armenian Patriarchate in Istanbul and the Santa Maria church in Trabzon could not be reached for comment while the Ecumenical Patriarchate of Constantinople in Istanbul wouldn’t immediately provide comment.

Back in northeast Turkey, the Sumela monastery built into a mountain high above Trabzon is today a museum. Every inch of the Rock Chapel’s walls are covered in frescos depicting a variety of stories and scenes from the Bible. But many symbols of Christianity – crosses carved into mountain stone and frescos – have been destroyed. This stunning enclave is a monastery in name only. No one lives here now.

Historian Ismail Kose, a professor at Erciyes University in Kayseri, says most of the damage to the frescos took place in the late 17th century and again when the Ottoman empire disintegrated in the 1910s.

“You have to remember this was a time of war, during and after World War I. Acts targeting religious symbols took place all over the region,” he said.

Kose says it is “impossible” that Sumela monastery, one of the region’s most stunning feats of construction engineering, could go the way of Trabzon’s Hagia Sofia and be converted into a mosque because it holds no historical ties to Islam.

The same cannot be said for Istanbul’s iconic Hagia Sofia, once a church and now a museum. There is growing movement to turn it back into a mosque.

More than buildings, other cultural riches rooted in Christianity are being consigned to history. “As few as 5,000 people speak the dialect [spoken by Turkey’s Pontic Greeks] but linguists believe that it is the closest, living language to ancient Greek and could provide an unprecedented insight into the language of Socrates and Plato and how it evolved,” wrote a 2012 entry on the Black Sea Pontic Greek Community blog.

The reuse of ancient religious buildings for contemporary life is neither new nor unique to Turkey. But the government’s refusal to protect important links to the past is something that troubles many Turks.

“Of course the government is responsible,” said Koptas. “Though it is renovating some churches in Turkey, this is the mentality of the government. It has Islamism in its mind-set.”