Tsipras struggles as Syriza members say ‘this deal is not us’ 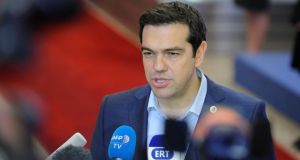 Greek prime minister Alexis Tsipras talks to the press at the end of the Eurozone leader summit on the Greek crisis on Monday. Photograph: EPA.

Greek prime minister Alexis Tsipras is facing a struggle to keep his majority in parliament after a number of government figures distanced themselves from the deal with creditors.

A rebellion in the ruling Syriza party has been on the cards since Saturday morning, when 17 of the party’s MPs failed to vote to authorise Mr Tsipras to negotiate with Greece’s lenders. Another 15 indicated over the weekend they would not vote for individual austerity measures.

As the scale of the tough terms accepted by Mr Tsipras emerged this morning, senior party figures were predicting the prime minister would struggle to hold his government together.

“Right now there is an issue of a governmental majority (in parliament),” Labor Minister Panos Skourletis told Greek television. “I cannot easily blame anyone who cannot say ‘yes’ to this deal.”

“We aren’t trying to make this deal look better, and we are saying it clearly: this deal is not us,” he added.

The strongest internal criticism came from energy minister Panagiotis Lafazanis, leader of the so-called Left Platform within Syriza, who said the deal was “humiliating” and should be rejected. “We will fight it,” he said.

There was speculation in Athens that Mr Tsipras could sack Mr Lafazanis, along with deputy labour minister Dimitris Stratoulis, a former trade unionist and a fierce opponent of pension cuts.

The uncompromising speaker of parliament, Zoe Constantopoulou, who defied Mr Tsipras and abstained from the vote on Saturday, could only be replaced through a no confidence vote.

Under Syriza party rules, deputies are supposed to resign their seats if they publicly disagree with government policy although there is nothing to stop them refusing to stand down and holding on to their seats as independents.

The government has 162 seats in the 300-seat parliament, and Mr Tsipras can depend on support from the opposition benches to pass the austerity measures this week. Three opposition parties - New Democracy, Pasok and Potami - have indicated they will support the government.

One option for Mr Tsipras is to form a government of national unity, but major questions remain over how stable such an arrangement would prove, given the ideological differences between Syriza and the conservative New Democracy and left-leaning Pasok.

Most analysts in Athens believe the deal agreed in Brussels brings a Greek election closer. Opinion polls suggest Syriza remains by far the strongest party and the most likely winner.

The Syriza newspaper Avgi said that if Mr Tsipras was not to become a “hostage,” changes would have to be made.

“That raises the issue clearly of reshaping the government, of the government’s majority, which leads to elections very soon,” it said in an editorial on Sunday.