Timeline of events from the Paris to Brussels attacks 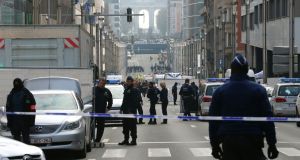 Policemen stand guard near a security perimeter set in the Rue de la Loi near the Maalbeek subway station, in Brussels, after an explosion killed around 10 people, according to spokesman of Brussels’ fire brigade. Photograph: Las Maeterlinck/Getty Images

November 13th, 2015: A series of explosions rock Paris in the worst terrorist assault on Europe in a decade. A number of restaurants, the Bataclan concert hall and the Stade de France are targeted. 130 people are killed in the attacks and hundreds more injured.

November 18th, 2015: Belgian extremist Abdelhamid Abaaoud, (27), suspected of masterminding the deadly attacks in Paris, dies along with his female cousin in a police raid in the Paris suburb of Saint-Denis. A third body is later found and eight people are detained.

November 21st, 2015: Brussels is placed in lockdown, remaining at maximum alert over information about an ”imminent threat”, possibly a series of co-ordinated attacks at different locations.

November 22nd, 2015: Some 19 raids are carried out in Molenbeek, home to many of the Paris attackers, and other boroughs of Brussels, and there are three raids in Charleroi. A total of 16 people are arrested.

November 23rd, 2015: An explosive vest containing bolts and the same type of explosive used in the Paris attacks is found by a street cleaner in a pile of rubble in Chatillon-Montrouge, just south of Paris. A fourth suspect — one of the 16 arrested the previous day — is charged with terrorism offences; the other 15 are released.

November 25th, 2015: French parliamentarians overwhelmingly vote to continue air strikes against Islamic State in Syria beyond early January. Schools and some subways reopen for the first time since emergency measures were imposed in the Belgian capital.

November 26th, 2015: Belgian authorities raid three more places outside of Brussels which they say are linked to the Paris attacks, but make no arrests. The Belgian terror threat is lowered to the second-highest level in the capital Brussels, with officials calling a threat “possible and likely”.

December 3rd, 2015: Two more suspects are arrested. A French national, identified only as Samir Z, is detained at Brussels national airport as he bids to fly to Morocco. A second man, identified as Pierre N, is arrested during a raid only hours after the detention at the airport.

December 10th, 2015: Prosecutors find Paris suspect Salah Abdeslam’s fingerprint during a search of an apartment in Schaerbeek, Brussels. They believe it served as a bomb factory for the Paris attacks. Three handmade belts which could have been intended to transport explosives, as well as bomb-making equipment, traces of TATP explosive residue and a fingerprint from Abdeslam were found there, the federal prosecutor’s office says.

December 20th, 2015: Belgian authorities search a house in Molenbeek, and detain an unidentified person for questioning.

December 24th, 2015: Belgian authorities arrest a ninth suspect linked to the Paris attacks, a Belgian citizen born in 1985 they say had been in contact with the suspected ringleader’s cousin.

March 15th, 2016: An Algerian man living illegally in Belgium, Mohamed Belkaid, is killed by police during a raid on an apartment building in the quiet Brussels suburb of Forest, where authorities also find a stock of ammunition and an Islamic State, also known as Isis, flag.

March 18th, 2016: Salah Abdeslam is wounded in the leg and captured by Belgian police in a raid in the Molenbeek district of Brussels after four months on the run. Two other men are also arrested.

March 22nd, 2016: Just days after Abdeslam is captured, Brussels is hit by attacks on Zaventem airport and the city’s metro system, near a station close to European Union buildings.

Miriam Lord: Dáil stuck in limbo ahead of loosening and talks conclusion