The new division Germany faces is no longer east-west, but urban-rural 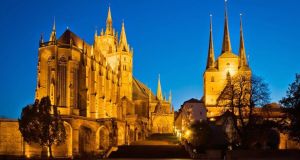 The cathedral in Erfurt, capital of Thuringia, which has the lowest jobless rate of all the eastern states at just 7.5 per cent – below the eastern German average of 9.4 per cent. Photograph: Tobias Conrad

The oldest Bratwurst recipe, dating from a Thuringian convent in 1404, was rediscovered here in 2002. Two years later the EU designated the sausage a protected food product in the EU, meaning anything calling itself a “Thüringer Bratwurst” has to be produced here. Some 40,000 tonnes are produced annually.

Sitting in his kitchen in Erfurt, Thuringia’s pretty capital city, Bratwurst master Andreas Bräuer says the state became synonymous with sausages because of the proliferation of wild oregano.

“People here learned to cook with herbs early on and their products became very popular, even in the times of German division,” said Bräuer, owner of Europe’s oldest grill and barbecue school, and a regular visitor to world grilling championships – once even taking home the “world grill master” title.

The result is delicious, but Bräuer says he is still working to perfect it. It’s this tinkering or tüftlen spirit that made Thuringia one of Germany’s most innovative regions for precision engineering.

Long before Munich or Stuttgart took the lead, Carl Zeiss was turning out precision lenses 150 years ago here in the city of Jena. The world’s first BMW wasn’t produced in Bavaria, but in Thuringia’s Eisenach in 1904.

What’s remarkable and heartening when you tour this state – a little smaller than Connacht – is how four decades of socialism and state-run factories failed to extinguish Thuringia’s entrepreneurial spirit or set back its engineering tradition.

Today it has the lowest jobless rate of all the eastern states at just 7.5 per cent – below the eastern German average of 9.4 per cent and ahead of western states like Hamburg and even the industrial powerhouse of North Rhine-Westphalia.

“We already see ourselves playing in the Bundesliga, next is the Champions League,” says Andreas Krey of the state development agency (LEG).

While other eastern states quickly sold off shuttered East German factories and land, Thuringia handed the deeds of state-owned plants, sites and even ex-military bases to the LEG, meaning it can now give would-be investors a site or even a factory and let it get straight down to business.

Considering the challenges of the last 25 years, the state now faces an almost luxurious problem of having more qualified jobs than people, a gap that may rise to an estimated 250,000 by 2030 as new companies come and older, skilled employees retire.

Enter the LEG’s Thaff programme, reaching out to the thousands of skilled workers who moved west after 1990, as well as the estimated 125,000 who still make a daily or weekly work commute to neighbouring Bavaria and Hesse.

While the state population is still shrinking and has reached record low levels, in 2013, the number of outward migrants fell below that of inward migrants for the first time.

Among the almost 44,000 returnees last year was 26-year- old Nadja Sachse. After studying and working in western Germany for six years, she grew tired of the eight-hour round trip to see her family at weekends.

“I learned a lot in western Germany about international business, but there is a pressure there to be always available, always working,” she said.

“Here in Thuringia I think we have a healthier work-life balance and that makes up for the lower earnings.”

Thuringia remains third-last among German states with average earnings of €30,300, though salaries are increasing faster here than elsewhere – up 12 per cent since 2009.

But challenges remain: around one-third of Thuringia’s state budget is financed externally, either by EU funds or from the financial equalisation fund set up to finance the cost of German unification. This fund, costing €16 billion in total annually, is up for renegotiation in five years’ time.

“We will have to live with less from 2019, but I’m confident we are investing our funds wisely. What we can’t have is an abrupt end to the funding.”

A quarter-century after the Berlin Wall fell, the reversal of migration is just one example of how old patterns are starting to blur. Old east-west distinctions no longer apply and two clear trends are emerging.

The first, obvious as you travel through rural eastern Germany, is that the cities are doing well, while the countryside is struggling.

Rising property prices in cities suggests a flight from the land is under way, with even older Germans moving back to cities to be near vital services. Keeping rural communities viable – with doctors, shops and schools – is the political challenge for the next 25 years. But this is a task faced by eastern and western states alike.

The first eastern German region to show up, in 10th place, is the Vorpommern region on Germany’s eastern Baltic coast.

Though eastern incomes are on average still 15 per cent below their western equivalents, the IW report suggested lower costs of living even out – and in some cases reverse – the initial financial disadvantage.

In Thuringia some 14-16 per cent of people live in relative poverty, similar to the western state of Saarland.

After a remarkable quarter-century of transformation, the new division Germany faces is no longer east-west, but urban-rural.