Overnight shooting takes place near town of Nenzing, not far from border with Liechtenstein 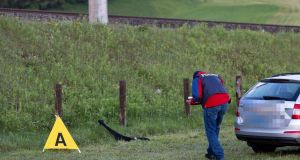 A police investigator taking evidence at the scene of a shooting in Nenzing, Austria, where a man fatally shot two people and wounded eleven before killing himself. Photograph: Dietmar Mathis/AFP/Getty Images 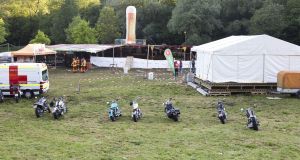 The scene of a shooting in Nenzing, Austria, where a man fatally shot two people and wounded eleven before killing himself. Photograph: Dietmar Mathis/AFP/Getty Images

A man shot dead two people and wounded 11 others before turning the gun on himself at a concert organised by a motorcycle club in western Austria on Sunday, a police spokeswoman said.

The shooting took place at around 3am (1am Irish time) at the concert in Nenzing, a market town near the border with Liechtenstein. Around 150 people attended the event.

The police spokeswoman said that after a row with his girlfriend, a 27-year-old man grabbed a gun from his car and fired randomly into the crowd. The girlfriend was unharmed.

Police said the full circumstances of the incident were not yet known and that investigations were ongoing.