Men detained after searches in Brussels, Mechelen and Duffel on Sunday 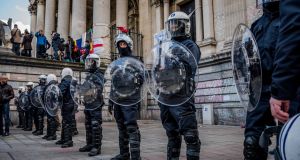 They were among four people detained during searches in Brussels and the northern cities of Mechelen and Duffel on Sunday.

Belgian prosecutors did not release details on the alleged terrorist actions or whether they were linked to the March 22nd suicide bombings at Brussels airport and on the city’s Metro.

The fourth person has been released without charge, according to a statement from the Belgian Federal Prosecutor’s Office.

Those charged by the investigating magistrate were identified only as Yassine A, Mohamed B and Aboubaker O.

The charges came as Brussels Airport was due to test its capacity to partially resume passenger service. But an airport official said it was still too early to say when the airport might reopen.

The Belgian government must approve the new system, he said, before Brussels Airport can resume handling passenger traffic.

Two suicide bombers on March 22 damaged the airport’s departure hall, and along with another suicide bomber who blew himself up on a Brussels Metro train, killed at least 35 people and injured another 270.

2:30 No new taoiseach elected as voting concludes on first day on new Dáil