‘The bailout is over. Blackmail is over. Subservience is over’ 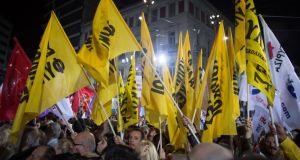 Supporters in Athens hear Alexis Tsipras, leader of the Syriza party speak at a pre-election rally ahead of this weekend’s general election in Greece. Photograph: Matt Cardy/Getty Images

The man widely tipped to become Greece’s next prime minister and the EU’s first openly anti-austerity head of government has told voters that they are on the verge of making history, not only for their own country but for the whole continent.

Speaking at his party’s final rally ahead of Sunday’s general election, Syriza leader Alexis Tsipras reiterated his call for his party to be given a “clean, crystal-clear, unadulterated and indisputable mandate” to strengthen Greece’s position in Europe.

“Our answer is: the bailout is over. Blackmail is over. Subservience is over,” Mr Tsipras declared, to the cheers of the large crowd assembled on Omonia Square in central Athens.

“We want Syriza to be given a chance, maybe Greece’s last chance. And want this clear chance to have the power to stand up to a worn-out system and the perpetrators of austerity,” he continued, saying the memorandums signed with the country’s troika of lenders had brought “catastrophe and barbarity”.

In a gesture clearly directed towards the German capital, both leaders embraced on to the podium to the sound of Leonard Cohen’s, First we take Manhattan.

Mr Tsipras vowed to reject “fiscal supervision from whatever source” and received one of his biggest cheers of the night when he said that he will press for the repayment of a forced war loan from Greece to Germany during the second World War.

According to a number of polls published on Thursday, Syriza maintains a steady lead over conservative New Democracy, with one survey giving it a six-point margin that in the event would not be enough for Mr Tsipras’s party to form a single-party government.

The GPO poll for Mega TV put the leftist party at 32.5 per cent, with New Democracy trailing at 26.5 per cent. In third place was the newcomer centrist Potami (River) party, on 5.8 per cent. Neo-Nazi Golden Dawn and the orthodox communist KKE came fourth on 5 per cent each, ahead of New Democracy’s socialist coalition partner Pasok on 4.4 per cent and nationalist Independent Greeks on 3.4 per cent.

“I’m convinced it will be easier for me to find work if Syriza wins the election. Tsipras said he’ll create jobs and I believe him,” said Eleni, a 24-year-old kindergarten teacher and disillusioned former Pasok voter.

Expressing a more sceptical view, her friend Vasia, a 25-year-old secondary-school teacher, said she was more hopeful than certain that Syriza would bring chance.

“There’s nothing else to go for. I voted for the communists last time, but became frustrated because they’ve done nothing to change anything. At least Tsipras gives us hope.”

But if Syriza is deemed a party of the youth, most of the crowd at the rally were middle aged or older, like Babis and Fotini, a retired couple.

“We want change not only in Greece, but across Europe. The change will start from here, and then go through Spain, Portugal and Ireland. There has to be social justice,” said Babis.