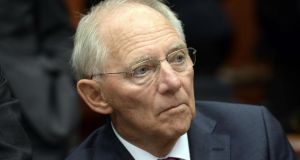 German finance minister Wolfgang Schäuble: “Politicians have their responsibility for their office. No one can force them.” Photograph: Thierry Charlier/AFP/Getty Images.

Cracks are widening in Germany’s ruling grand coalition over a third aid programme for Greece, a week after Berlin proposed a “time-out” euro zone exit for Athens.

Chancellor Angela Merkel conceded the option had been on the table at crisis talks last week in Brussels, “but we decided differently”.

She declined to confirm or deny she was aware that finance minister Wolfgang Schäuble would table the “time-out” paper in Brussels and refused to comment on reports of a “huge conflict” with him on this point.

Dr Schäuble has conceded differences with Dr Merkel over Greece and, in an interview with Der Spiegel magazine, floated the idea of resigning on this point.

“Politicians have their responsibility for their office. No one can force them,” he said.

In damage-limitation mode yesterday, Dr Merkel said “no one had asked me to be discharged”.

“The finance minister will lead talks [with Greece] along with me,” she said.

She has brushed off her negotiation of a third bailout road map with Athens in Brussels. “I am doing what I think I have to do,” she said. “A compromise for the sake of compromise just to keep a good mood won’t improve the situation in Europe. ”

The mood in her grand coalition is deteriorating rapidly over Greece.

Dr Schäuble has hit out at his Social Democratic Party (SPD) coalition partners. Its leader Sigmar Gabriel has denied knowing the “time-out” proposal would form part of Berlin’s strategy in Brussels.

“To present this suggestion as a German proposal was, in my view, not sensible,” said Mr Gabriel.

Dr Schäuble hit back at the SPD leader, suggesting “one shouldn’t try to solve one’s own problems through inaccurate claims”.