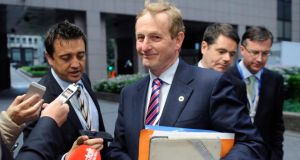 Taoiseach Enda Kenny has reiterated Ireland’s claim for bank debt relief from Europe, saying he told EU leaders last night that Irish families were “worn out” with the efforts required to tackle the economic crash.

Having said on his arrival in Brussels that the result of the elections last Friday could be seen as a message to EU leaders from the Irish people, the Taoiseach said after last night’s summit that he had again raised the question of the bank rescue with his European counterparts.

“I did point out to the council that in Ireland we have had five to six years of very difficult circumstances, that many families are really strained and worn out with the challenge that they’ve faced and put up with,” Mr Kenny said shortly before midnight.

“And while our figures from an international perspective – our bond yields have dropped from 15 per cent to 2.6 [per cent] where unemployment has fallen for 24 consecutive months – where the figures on paper are very good and heading in the right direction, that is not being seen by families or felt by families on a daily basis.

“So if Europe is really seen to be effective in terms of employment, opportunity, credit for small businesses and these things this is where we need to be.” Mr Kenny’s remarks come as European leaders consider their response to European elections in which anti-EU and far-right parties made strong gains in many member states. The leaders should now fortify their drive for economic growth, stability and job creation, said the Taoiseach as he arrived for the meeting.

Recapitalisation Ireland’s claim for direct bank recapitalisation from the EU authorities, to compensate the Government for its support of the banking system, remains outstanding. Germany remains unconvinced about the need for aid, especially since the Government managed to leave the EU/IMF bailout last December without a financial safety net.

Irish borrowing costs on private markets have also declined appreciably since the end of the bailout.

Although Mr Kenny said the implementation of a pledge by EU leaders in June 2012 to ease the cost of the Irish bank rescue should be part of Europe’s response to the election, he said the process would not be advanced until the new banking union initiative was completed later this year

Labour lost all three of the seats it won in the last European election, but Mr Kenny made a point of saying Fine Gael had retained four seats. However, Fine Gael suffered heavy losses in local elections.

The Taoiseach said “I do” when asked if he saw the election outcome as a message to EU leaders from Irish voters. The impact of the crisis was to be seen across the broad spectrum of EU countries, he added.

“It is a case now of the European Council getting on with making political decisions and implementing them,” the Taoiseach said.