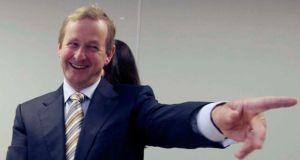 Taoiseach Enda Kenny: ‘I’ve a job to do here and I’m happy and privileged to do that job as Taoiseach.’ Photograph: Stephen Collins/Collins Photos 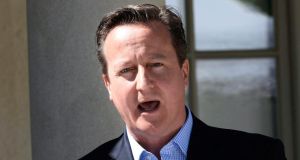 Taoiseach Enda Kenny has dismissed speculation he may be appointed the new president of the European Commission ahead of former Luxembourg prime minister Jean-Claude Juncker.

There is growing expectation Mr Juncker will be named as the next president of the European Commission at next week’s summit of EU leaders in Brussels, despite opposition from British prime minister David Cameron.

Mr Juncker has been nominated for the presidency by the centre-right European People’s Party (EPP), the largest party in the European Parliament after last month’s elections, with which Fine Gael is aligned.

In an interview with Gay Byrne to be broadcast on RTÉ television tonight, Mr Kenny said he fully expects Mr Juncker to be named EC president.

Asked if pressure came on him to accept the role instead of Mr Juncker, Mr Kenny replied: “Where would the pressure come from?”

He added: “I’ve a job to do here and I’m happy and privileged to do that job as Taoiseach.

“Clearly my job is here in Ireland,” said Mr Kenny. “I don’t see any circumstances in which Jean-Claude Juncker will not become the president of the commission.”

Mr Cameron, who wants to block Mr Juncker’s appointment, will seek to force an unprecedented vote on the issue this week. He will spell out his concerns in a meeting with European Council president Herman Van Rompuy tomorrow, ahead of a meeting with counterparts from across the 28-member union on Friday.

He wants a delay in the process in an effort to find a consensus candidate, but if leaders are not willing to consider alternatives to Mr Juncker, Mr Cameron will call a vote and require his counterparts from across the EU to set out their positions clearly. The move would mark a distinct break from the way that the commission president is usually chosen, with the nomination agreed between the leaders.

Mr Juncker, viewed as an arch-federalist and potential road block to reform by Mr Cameron, was put forward by EPP, under the “Spitzenkandidaten” process. Speaking on Fridday in Luxembourg, Minister for Finance Michael Noonan said he supported Mr Juncker’s candidacy. “I think there’s a fundamental democratic position that our party, the European People’s Party, put him forward as his candidate on the clear understanding that if we had a majority, he would be the candidate for President Barroso’s position. So I think there was a commitment to the public on that basis.”

Asked whether Mr Juncker, who was the head of the euro group during the Irish bailout, was the right candidate for the position, Mr Noonan said: “He was the selected candidate by vote in Dublin and he defeated Michel Barnier, and that’s the position.”

Mr Cameron has made clear that he believes EU treaties give the power to nominate candidates for top jobs to national heads of government, meeting in the European Council, and not to the European Parliament.

Mr Cameron has vowed to “fight this right to the very end” but his stance was criticised by Austrian chancellor Werner Faymann, one of the centre-left leaders who agreed to back Mr Juncker at the Paris summit.

He is reported to have told the Kleine Zeitung newspaper that Mr Cameron could be defeated at the European Council summit if he forces the issue to a vote and added: “We cannot allow a single person to dictate everything to us.”

Poland’s foreign minister Radoslaw Sikorski told Sky News the process for nominating Mr Juncker was democratic, because he was the choice of the EPP.

“In Dublin a couple of months ago, we agreed that this time it would be more democratic, not just national leaders meeting in a room overnight and coming out with a solution — this time we decided to nominate a candidate ahead of the election.

“And the candidates of the socialists, the liberals, and the centre right were plastered all over Europe - so those who bothered to take an interest knew that if they voted for us, then Mr Juncker would be the candidate. And we won — we got the largest number of votes.

“And so we - as the European People’s Party - are having the first shot at putting together a team that will create a coalition. The winning party’s top candidate is the candidate for the top job that’s democracy.”

But he added: “I think there is still every room for influencing Mr Juncker’s programme, and Mr Juncker’s team - including the position of Britain’s commissioner.”

The need for Mr Cameron to be able to negotiate a new arrangement with Brussels was underlined by an opinion poll which showed that almost half of Britons would vote to leave the EU under the current membership terms.

Mr Cameron has vowed to renegotiate the UK’s relationship with Brussels before an in/out vote on membership of the EU by the end of 2017.

The poll found that if Mr Cameron was able to secure a deal which “redefined the terms of Britain’s membership” then 42 per cent would definitely or probably vote to remain in the EU, with 36 per cent saying they would probably or definitely vote to sever ties with Brussels.

But just 18 per cent of those polled believed it was quite likely or very likely that Mr Cameron would be able to secure “satisfactory” terms, with 55 per cent saying it was quite or very unlikely.