Party is prepared to negotiate with EU on debt issue, says Dimitris Papadimoulis 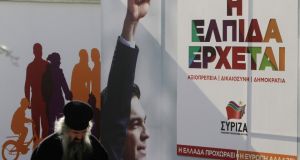 A Greek orthodox priest in front of a pre-election kiosk of the radical left Syriza party in Athens. Greeks will vote on their next government on January 25th. Photograph: Orestis Panagiotou/EPA

European Parliament vice-president Dimitris Papadimoulis has moved to calm fears among EU leaders at the prospect of the anti-austerity leftist Syriza party winning the upcoming general election in Greece.

Mr Papadimoulis said Syriza, of which he is a member, is looking for a write- down of the “major portion” of his country’s debt, which is 180 per cent of GDP and couldn’t be managed, regardless of who won the general election on January 25th.

Speaking at the European Parliament in Strasbourg Mr Papadimoulis said Syriza did “not want a write-down in order not to implement change”. What was needed was a “breathing space” to allow Syriza to introduce a just society, where the rich paid more tax than the poor. He said the current position was the reverse where “Greek shipping owners pay less tax than their crews”.

The austerity measures introduced by the troika – the European Commission, the IMF and the European Central Bank – had caused a “humanitarian crisis in Greece”, he said. What was needed now was an acceptance that austerity would “destroy Greece” and its ability to repay the debt: “The only way to face extreme debt is through growt, through making the levels of debt viable.”

The party was prepared to negotiate with the EU on the debt issue, said Mr Papadimoulis. Wednesday’s decision by the European Court of Justice that the ECB could buy the bonds of euro zone countries in a bailout programme put paid to the untruth that Greece would be forced to leave the euro zone, he said adding that other measures would be be found following negotiations after the election.

Mr Papadimoulis was supported by Gabi Zimmer, president of the parliament’s left-wing GUE/NGL group. Ms Zimmer a German MEP, said the Greek people can “now decide their future for themselves”. She said an “alternative way forward is clear” and would be clear to other countries facing austerity, including Spain and Portugal.