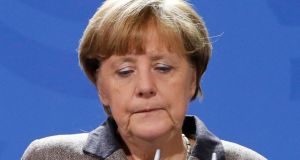 German Chancellor Angela Merkel makes a statement on the Istanbul attack: at least 10 people died, most of them German tourists, in the city’s historic area. Photograph: Fabrizio Bensch/Reuters

Istanbul’s usually thronged tourist districts fell quiet last night following a suicide bombing that claimed the lives of 10 foreign tourists and called into question the strategy of the ruling Justice and Development Party (AK Party) towards the war in neighbouring Syria.

Nabil Fadli (28), a Syrian national born in Saudi Arabia, is suspected of carrying out the attack in Turkey’s most popular historic quarter.

The suspect recently crossed into the country from Syria, said a senior Turkish minister, but was not listed on any government terrorist watch list.

Turkey says it has barred thousands of suspected foreign extremists from entering the country, for years used as a gateway by which to reach Islamic State-controlled territory in northern Syria and Iraq.

Ankara also claims its hands are tied in detaining foreign suspects unless first requested to do so by their own governments.

According to an eyewitness at the scene of the explosion, the blast was extremely loud but there was little sense of panic in the aftermath. She added that Syrians in Turkey should not be held collectively responsible.

“I don’t think this is a Syrian problem,” said Nura, who works for a translation service company. “Syrian people work very hard in Istanbul. This terrorism is a global problem and Turkey is a central country; there are bombings everywhere today.”

About 400,000 Syrians live permanently in Istanbul; thousands more use the city as a resting point before travelling onwards to Europe.

During the early days of the Syrian revolution, Turkey allowed civilians and rebel groups to pass through its border relatively unhindered. As the war turned increasingly brutal, however, some opposition groups directly or indirectly supported by Ankara took on more extremist world views. Many joined Islamic State, also known as Isis.

More recently, Isis has gained a foothold in Turkey by recruiting impoverished young men, often from regional cities close to the Syrian border.

Over the past 12 months Turkish security forces have mounted dozens of raids on suspected Isis cells around the country. As recently as Saturday it detained Egyptian and Russian suspects in raids across Istanbul and the south of Turkey.

However, while Turkey this month enacted a policy of requiring visas for Syrians entering from third countries for the first time, Ankara reaffirmed its commitment to leaving open its 900km border with Syria, despite criticism from allies such as the United States.

“Turkey is undergoing such a problematic period,” analyst Nihat Ali Ozcan told the Today’s Zaman. “The terrorist group which perpetuated the attack sends a message to the Turkish government that it has failed to prevent such an attack.”

Ankara is also battling secessionist Kurds in the southeast, where several towns have been under military curfew for a month. The Kurdistan Workers’ Party (PKK) has carried out bombings in Istanbul in the past, but not on tourist targets.

Leftist militants have also mounted attacks against government and police facilities in Istanbul.