Swiss soldiers sent home from Davos for cocaine use

Seven more disciplined for cannabis consumption after 12 suspected of intoxication 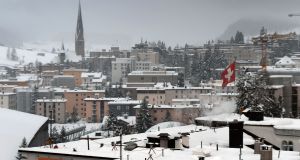 Five Swiss soldiers deployed to protect the World Economic Forum in Davos have been sent home after testing positively for cocaine, the Swiss army said.

Seven more were disciplined for cannabis consumption after all 12, returning from leave, were suspected of intoxication.

“All 12 soldiers consumed cannabis and five of them additionally consumed cocaine,” Swiss army spokesman Stefan Holder said. “These five were immediately sent home. The others are receiving disciplinary punishment during their duty.”

The five sent home were immediately dismissed from their military duty, Mr Holder added, and one of them, discovered with around 3 grams of cocaine, will face civilian legal consequences as well as military discipline. Those could include fines or detention.

“From the army’s perspective, it went well: there was a suspicion, which was then investigated, and we determined that 12 had consumed (drugs) and were able to remove them before they took up a weapon again or were able to drive a vehicle,” Mr Holder said.

The Swiss army functions under a militia system in which young men reaching adulthood do terms of military conscription, so it reflects society as a whole, Holder said.

The army has made roughly 4,500 soldiers available to protect the gathering of high-powered and high-profile leaders at Davos. It does not comment on the actual number of personnel deployed, Mr Holder said.