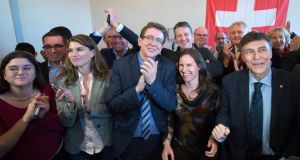 Senior figures in the Swiss People’s Party cheer the results of the referendum to limit EU migration to the country. Photograph: EPA/Marcel Bieri

The European Union has warned it will reassess relations with Switzerland following yesterday’s decision by voters to limit EU migration to the country.

Fifteen years after the country signed up to EU free-movement laws, Switzerland narrowly voted to reintroduce quotas on EU immigration, potentially throwing its relations with Brussels into turmoil.

Approximately 50.3 per cent of voters in yesterday’s referendum backed the motion to set an upper limit on immigration from the EU. The majority of cantons or regions also voted in favour. Turnout was just over 56 per cent – one of the highest turnouts in the last decade.

In a statement yesterday evening, the European Commission said it regretted the outcome of the vote, warning it would examine the implications for EU-Swiss relations.

“This goes against the principle of free movement of persons between the EU and Switzerland,” the EU’s executive arm said. “The EU will examine the implications of this initiative on EU-Swiss relations as a whole.”

It also noted it would take the position of the Federal Council – Switzerland’s seven-member federal government – into account. From today, the Federal Council has three years in which to renegotiate its treaty with the EU and implement the changes into national law.

The introduction of quotas on EU immigrants violates existing treaties between Switzerland and the EU, which also give Switzerland access to the EU’s single market. Focus will turn to what changes the EU will demand in a renegotiated treaty, with many believing it will not tolerate challenges to its free movement laws.

With anti-immigration feeling on the rise throughout Europe and expected to play a central role in May’s European elections, Brussels is also likely to want to take a strong stance on the issue.

Space for negotiation
While the new law adopted by Swiss voters does not specify what cap will be applied to migrations, it states the number of permits issued will be limited by ceilings and annual quotas, implying some space for negotiation on the actual caps that will be introduced.

The EU is Switzerland’s largest trading partner, and business groups had warned that a Yes vote could severely harm Swiss companies’ access to European markets.

The referendum result revealed a clear geographical split, with voters in the German and Italian-speaking areas in the east of the country voting in favour, and those in the French-speaking west opposed to the motion.

The referendum was proposed by the Swiss People’s Party (SVP), an increasingly dominant force in Swiss politics, which holds a majority in the lower house of parliament.

Like other non-EU countries such as Norway and Liechtenstein, Switzerland has remained outside the EU while maintaining close ties with the bloc. Although not part of the European Economic Area, Switzerland has a number of bilateral arrangements with the EU.

Common market access
In 1999, it signed a treaty with the EU following years of negotiation. The laws, which came into force in 2002, saw both sides sign up to free movement rules, in exchange for access to the common market.

Switzerland has long astounded analysts of national identity by successfully accommodating four official languages in a single national culture. It has one of the highest percentages of foreigners living within its borders in the developed world, according to the OECD.

It is estimated that one in five workers in Switzerland are foreign, while thousands of workers from France, Germany and Italy travel across the border each day to work.

However, as with many countries in Europe, anti-immigration has been on the rise, with the increasingly dominant SVP strongly in favour of a limit on immigration.

Concerns about housing availability, particularly in cities such as Geneva and Zurich, have driven the anti-immigration agenda, prompting the government to introduce a 12-month limit on residence permits for EU citizens last year.

But in a country with a highly developed economy and a plethora of high-skill jobs, foreigners have traditionally helped to fill specialist roles, particularly in the banking, pharmaceutical and food industries. Foreigners are also responsible for a large number of start-up companies.