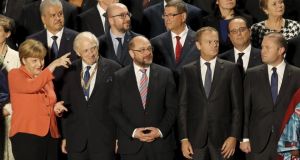 United Nations special representative for migration Peter Sutherland has broadly welcomed the action plan agreed by European Union and African leaders at the Valletta summit but warned its success could be measured only by implementation.

Speaking to The Irish Times on the second day of the migration summit, Mr Sutherland said that while the purpose of the conference had been achieved, action needed to be taken on the basis of the draft agreement.

He also criticised the tendency to distinguish between refugees and economic migrants during the two-day summit.

“We are under no illusions that we can improve the situation overnight. But we are committed to giving people alternatives to risking their lives,” he said.

In addition, the EU announced a €1.8 billion emergency trust fund for Africa, which could rise to more than €3 billion, based on contributions by member states.

Minister for Justice Frances Fitzgerald said the fund was a “key element” of the EU’s contribution to tackling the causes of instability, forced displacement and irregular. She also welcomed the emphasis in the plan on tackling people-smugglers.