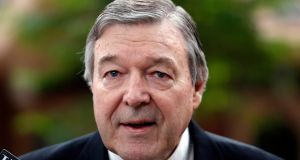 Cardinal George Pell, head of the Vatican’s Secretariat for the Economy, says he hopes an audit of the Vatican finances will resume very shortly, following its suspension this week. Photograph: Daniel Munoz/Reuters

An external audit of Vatican finances being carried out by global firm PricewaterhouseCoopers has been suspended by the Holy See.

The move raises further questions about whether Pope Francis continues to encounter internal resistance in carrying out reforms of the Vatican’s often haphazard and chaotic administration.

Since his election in 2013 the pope has made cleaning up the Holy See’s finances one of the key elements of his reform process.

To that end, he created two new bodies in 2014, the Secretariat for the Economy and the Council for the Economy, which were to exercise “oversight for the administrative and financial structures” of the Holy See and the Vatican City state.

It now seems that the Secretariat for the Economy, which is headed up by Australian cardinal George Pell, is on a collision course with the Vatican’s Secretariat of State, the traditional engine at the heart of Holy See administration.

This week, two senior figures at the Secretariat of State, Cardinal Pietro Parolin and Archbishop Giovanni Angelo Becciu, wrote to all Vatican entities to tell them that the ongoing audit by PricewaterhouseCoopers had been “suspended immediately”.
The audit was commissioned at a reported price of €3 million by Cardinal Pell last December. Archbishop Becciu reportedly stressed this week that previous instructions from Cardinal Pell, calling on departments to co-operate with the audit, had now been “suspended . . . by superior provision”.

Vatican insiders suggested yesterday that the rationale for this decision was based on concern both about the internal dissemination of confidential financial information and legal issues with the PricewaterhouseCoopers contract.

Although Cardinal Pell said yesterday he hoped the audit would recommence very shortly, the decision to suspend it still looks like an undermining of his authority. At first glance, he would appear to have been blocked by a Curia old guard that is resistant to reform.

Furthermore, Italian daily Italia Oggi this week spoke of the “complex situation” at the Vatican bank, arguing that the Pell “era”would shortly be “over”.

The US-based National Catholic Register newspaper said yesterday that such speculation was intended to unseat both Cardinal Pell and Frenchman Jean-Baptiste De Franssu, the president of bank.

The apparent move against Cardinal Pell comes just weeks after he was questioned in Rome by the Australian Royal Commission into his handling of cases of clerical child sex abuse. He will be 75 in June, the age at which senior Vatican figures are expected to hand in their resignation to the pope.

Given that most commentators believe the pope was fully informed about the two letters, it would seem evident that he sees this incident as nothing more than a shortlived Vatican power struggle, a minor obstacle in his reform process. That remains to be seen.