Spanish voters set for election in June after four-month stalemate 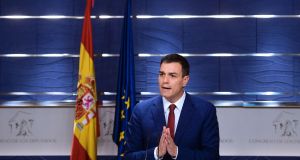 A new national election in Spain is now inevitable, Socialist leader Pedro Sanchez said on Tuesday after he told King Felipe he could not form a coalition government and resolve a four-month political stalemate.

The parties have been unable to form a new government since an inconclusive December election and a final round of one-to-one meetings between the king and party leaders.

With acting prime minister Mariano Rajoy having already said he was also lacking the necessary parliamentary backing, the lower house is now expected to be dissolved on May 3rd and the new general election is seen taking place on June 26th.

Opinion polls suggest a new vote would do little to resolve the deadlock created by December’s election, which produced the most fragmented result in decades. Mr Rajoy’s People’s Party won 123 seats in the 350-seat lower house of parliament while the Socialists took 90, Podemos 69 and Ciudadanos 40.

Party leaders have already entered campaign mode, blaming each other for the impasse that may start taking its toll on the economy more noticeably if Spain remains without a government for many more months.

“I have told King Felipe VI that I don’t have enough parliamentary seats to be elected prime minister . . . With all probability we are heading towards new elections,” Mr Sanchez told journalists.

“In my opinion, Mr Iglesias never wanted to pact with the Socialist party. Spanish politics have suffered a double blockade, from Mr Rajoy and from Mr Iglesias,” he also said.

Raising hopes that a last-ditch coalition deal was possible, the Socialists said earlier on Tuesday they were ready to agree on 27 of 30 proposals made by small leftist party Compromis and modelled on a deal it helped broker last year between left-wing forces in the eastern region of Valencia.

But anti-austerity party Podemos said those three conditions – mainly who should take part in the government and how to ensure its stability – had made any agreement impossible.

Mr Iglesias, however, said he would still try to form an alliance with the Socialists after a new election, although they would have to bury their disagreements over fundamental issues including economic policy and the degree of autonomy to grant Catalonia. – Reuters