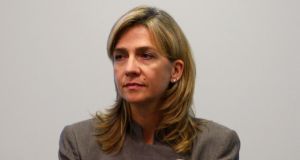 A Spanish court has upheld corruption charges against Princess Cristina de Borbon, sister of newly-crowned King Felipe VI, and her husband in one of the last steps before a trial that could cloud the monarchy’s bid to rebuild its reputation. Photograph: Daniel Aguilar/Files/Reuters.

A Spanish court has upheld corruption charges against Cristina de Borbon, sister of newly-crowned King Felipe VI, and her husband in one of the last steps before a trial that could cloud the monarchy’s bid to rebuild its reputation.

The rulings by the Palma de Mallorca court come barely a week after King Juan Carlos abdicated in favour of his son, who sought to repair the royal family’s scandal-worn image with a promise of honesty and transparency when he took the throne.

The court said it had formalised charges of tax fraud and money laundering against Princess Cristina (49), who was caught up in an investigation of her husband Inaki Urdangarin’s business dealings.

Mr Urdangarin (46), a former Olympic handball player, is accused of using his connections to win public contracts to put on events through his non-profit organisation Noos Foundation, and of embezzling several millions euro in public funds.

The couple, who have four children, are now a few administrative steps away from being put on trial. They have both denied wrongdoing and their defence attorneys have said they will appeal the latest ruling.

In his 167-page ruling, Palma Examining Magistrate Jose Castro - who has a dual role as prosecutor and judge - said there was evidence that the couple had paid for dozens of personal items - from parking tickets to children’s birthday parties to a trip to Rio de Janeiro - out of a shell company he said was used to launder proceeds from the Noos Foundation.

“Everything indicates that Cristina de Borbon y Grecia was an active participant in organising and budgeting these events which were clearly of a personal nature,” the judge said in the ruling.

Princess Cristina and Mr Urdangarin, if found guilty in a trial, could face sentences of multiple years in prison.

The royal family has lost favour after a series of scandals, including the Noos case, as Spaniards battle economic hardship and high unemployment, though Felipe has distanced himself from his sister and remained untouched by the case.

Polls have showed King Juan Carlos’ surprise abdication at 76 and his decision to hand over to his 46-year-old son have boosted the monarchy’s popularity. Juan Carlos’ elephant hunting trip at the height of Spain’s financial crisis in 2012 had damaged his standing.

Princess Cristina did not attend last week’s coronation, and she and Mr Urdangarin have been barred from official royal events since the investigation gathered pace.